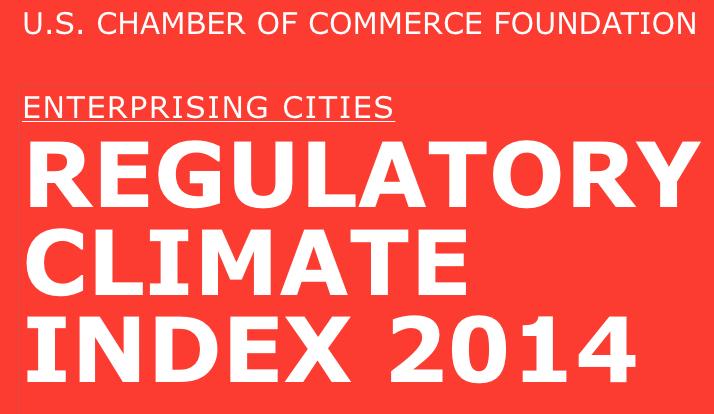 How can cities and local government provide more jobs, growth and opportunity for their citizens? By reducing regulatory burdens on small businesses, according to New Geography blog.

The post is by technologist, entrepreneur, urban analyst, and author Aaron Renn (better known as TheUrbanophile), who writes:

."..I can’t help but ask: what can we do that would be relatively fast to implement, provide jobs and entrepreneurship opportunities where people already are (particularly those who are lacking a decent job today), and which has a relatively high likelihood of payoff?

In my view overwhelmingly the number one thing we can do that fits this is to pare back the local regulatory burden on small business. I say local because affecting federal or state regulations involves making change at levels of government that are hard to move. Local regulations are mostly within the control of local political leaders. Changing them doesn’t require spending a lot of money. In fact, eliminating regulations might actually save the government money. Change a regulation and it’s changed immediately, and without a lag. It seems intuitive that lighter touch regulation would help small businesses launch and thus have some benefit….

What we need is for America’s mayors to stand up and make it a priority to start whacking away at this stuff. Waive fees for the first year for most permits (easy to do by charging in arrears). So many small businesses don’t even make it a year. Let’s give them at least that long to survive before we start socking them. Create a single point of contact for permit checklists and safe harbor protections for businesses that do what this office tells them. A true one stop shop would be best, but that’s likely harder than we think given the different agencies involved, but why not start by at least having someone who authoritatively tells you want agencies you do need to talk to and which permits you do need? Price permits at the cost of administering the permitting and compliance system. Hold management accountable for timely actioning. Use electronic forms wherever possible. The list goes on."

The U.S. Chamber of Commerce Foundation will surely agree. Last week, they issued a landmark report, Enterprising Cities: The Regulatory Climate Index. The report compares and ranks the efficiency of local regulations that apply to small businesses in 10 cities across America. In particular, the report looked at five areas of business regulation, based on the World Bank’s Doing Business project, include starting a business, dealing with construction permits, registering property, paying taxes, and enforcing contracts that reflect the business cycle of a business entity.

Every city measured has its own clear strengths and weaknesses. For example, Los Angeles and San Francisco have the best practices for opening a business, yet both cities have the highest requirements and costs to obtain construction permits. St. Louis has the best practice for the registration of properties but scores below average in enforcing contracts. Chicago ranks highly for enforcing contracts while ranking lower for starting a business.

But one thing is clear for all cities: The ease of doing business in America’s cities will help determine the future of America’s economic growth. With this Index, cities can learn from what other cities are doing to create a regulatory environment friendly to businesses of all sizes and stages of development.