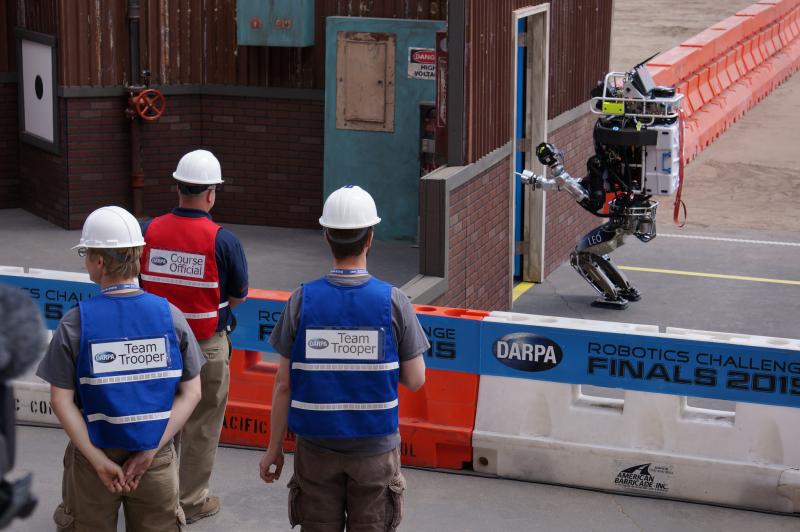 Team TROOPER, led by Lockheed Martin’s Advanced Technology Laboratories together with teammates from the University of Pennsylvania and Rensselaer Polytechnic Institute, participates in the DARPA Robotics Challenge Finals in June 2015. Photo by Lockheed Martin, distributed by Department of Defense.

In case you haven’t noticed, there’s a robot revolution taking place. This is not just something coming from pages of comic books, movie scripts, and science fiction but rather real machines taking on human tasks in new and very inventive ways. One of the biggest showcases for the unfolding robot revolution was the Defense Advanced Research Projects Agency (DARPA) 2015 Robotics Challenge. The two-day competition pushed the current state of robotics to its limits, with 23 teams from across the world competing for a $2 million prize. By all reports, the competition was slow, full of failure, and absolutely riveting.

At the Fairplex venue in Pomona, California, untethered, humanoid robots were controlled by teams of scientists and engineers camped out about a quarter of a mile away. The genesis for the competition was the meltdown at the Fukushima Daiichi Nuclear Power Plant after the 2011 earthquake and tsunami that struck Japan. Given that the radiation levels in the aftermath of the destruction made it unsafe for humans to work on rescue and cleanup, the obstacles at the DARPA competition were meant to simulate some of the challenges a remote-operated robot would encounter after a similar nuclear disaster.

The robots had one hour to complete eight tasks: drive an ATV; step out of the vehicle; open a door and walk through it; turn a valve; use a tool to cut a wall; traverse ground of sand or rubble; and finally, climb a flight of stairs or ramp. These are simple feats that humans accomplish every day, usually without thinking about them. The robots, however, spent many minutes preparing for an action—and often fell over at the critical moment.

Ultimately, it was Team KAIST from South Korea that won, completing all 8 tasks in 44:28, about 6 minutes faster than the second place winner, Team IHMC Robotics from the Florida Institute of Human and Machine Cognition, and about 10 minutes faster than the third place winner from Carnegie Mellon University. On the one hand, the sensors, algorithms, hydraulics and other technical advances that made these machines possible were impressive and groundbreaking. After all, no one had previously achieved this level of robotic sophistication in an almost-real world environment.

And yet, what would have taken a human less than five minutes to accomplish took the winners much longer, and most competitors were not even able to complete all eight tasks. More than that, robot autonomy was hugely limited, leading Gill Pratt, the DARPA program manager who set up the competition, to call all the robots “incredibly dumb” and “mostly just puppets.” Based upon his own observations, autonomous first responders (and Terminators of Hollywood nightmares) will not be strolling around amongst us for the foreseeable future.

Nevertheless, the DARPA competition succeeded in advancing the robotics field, and it did something else. It gave the world a glimpse into the challenges and excitement in robotics research. Thousands of people packed the venue to watch the competition and tens of thousands more have watched video highlights online. Even as the robots moved slowly and spent more time processing and preparing than acting, the competition was nevertheless gripping. Pratt said:

"These robots are big and made of lots of metal and you might assume people seeing them would be filled with fear and anxiety. But we heard groans of sympathy when those robots fell. And what did people do every time a robot scored a point? They cheered! It's an extraordinary thing, and I think this is one of the biggest lessons from DRC—the potential for robots not only to perform technical tasks for us, but to help connect people to one another."

It is through competitions like this that the broader public is exposed to the bleeding edge of modern technological research and development. This is particularly important for igniting an interest amongst young people in the fields of science, technology, engineering and mathematics (STEM). In a world that increasingly relies on technology, the United States sorely needs more people with the skills to develop, apply, and advance that technology and then take it several steps beyond that point.

Math and science might seem boring to a young person, but when they are shown a real-life Transformer (like the South Korean team’s robot that folds over and transitions from bipedal movement to rolling around on four wheels), it sparks imagination and excitement. Suddenly, the purpose of multiplication tables and science experiments takes on new meaning. Rather than arbitrary facts, a young person begins to understand they are learning the fundamentals that will someday allow them to do something innovative and groundbreaking. That enthusiasm is arguably more important and valuable that a robot that can augment first responder capabilities.

For as inspiring and empowering as this year’s robotic contestants may be, none of them competing at the DARPA challenge could operate without a team of humans behind them.  While autonomous action may become more common as technology and computing improves, the future of robotics depends entirely on the people who invest their careers in advancing it. That means not just enticing current scientists and engineers with a $2 million prize but also inspiring the young people who will become the next generation of innovators.