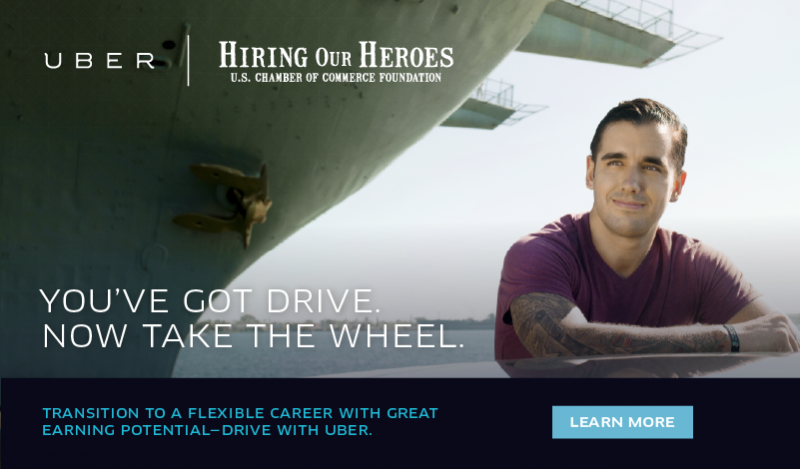 Uber has announced a partnership with Hiring Our Heroes to bring 50,000 veterans, service members and military spouses onto its platform as drivers in the next year and a half.

The company said it will use Hiring Our Heroes' job fairs and online programs to recruit drivers, and would offer other special benefits, including free rides to job fairs.

"By pledging to bring on 50,000 veterans and military spouses, Uber is telling them that this is not about charity—this is about finding the strongest candidates in the civilian workforce," said U.S. Chamber of Commerce President Thomas H. Donohue. "We look forward to working with Uber over the next 18 months to connect them with the best talent our country has to offer.”

The pledge to hire 50,000 veterans will help Hiring Our Heroes move closer to its goal of securing jobs for 500,000 veterans by the end of 2014. Since March of 2012, Hiring Our Heroes has worked to get pledges from businesses to hire a half-million workers under the Capital One Hiring 500,000 Heroes campaign. As of now, upwards of 1,700 companies have committed to hire more than 460,000 veterans and military spouses and 275,000 hires have been confirmed.

Uber is a ridesharing service that uses its own smartphone app to connect riders with drivers-for-hire. The company plans to use a new onboarding process, known as UberMILITARY, to connect with veterans, service members and spouses looking for jobs.

"UberMILITARY is a reflection that high-quality service, an unparalleled commitment to safety and the leadership potential inherent to small business entrepreneurship are values shared by those who have selflessly served our country," the pair wrote. "Not surprisingly, veterans on the Uber platform today consistently rank among our top-rated partner drivers and make more trips with Uber than non-veteran partners."