What’s the Cause and Effect of Plummeting Public Firms? 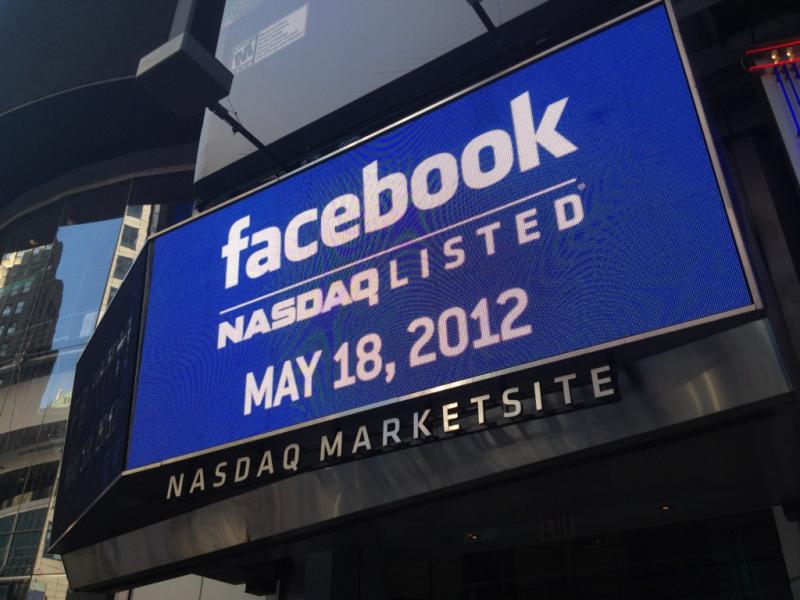 Facebook held a high-profile initial public offering in 2012, but the number of public companies has been on the decline. (Photo via Wikipedia.)

Tweet Facebook
What's the "correct" number of public firms in America? It's unclear, but the total number of IPOs has been dipping. 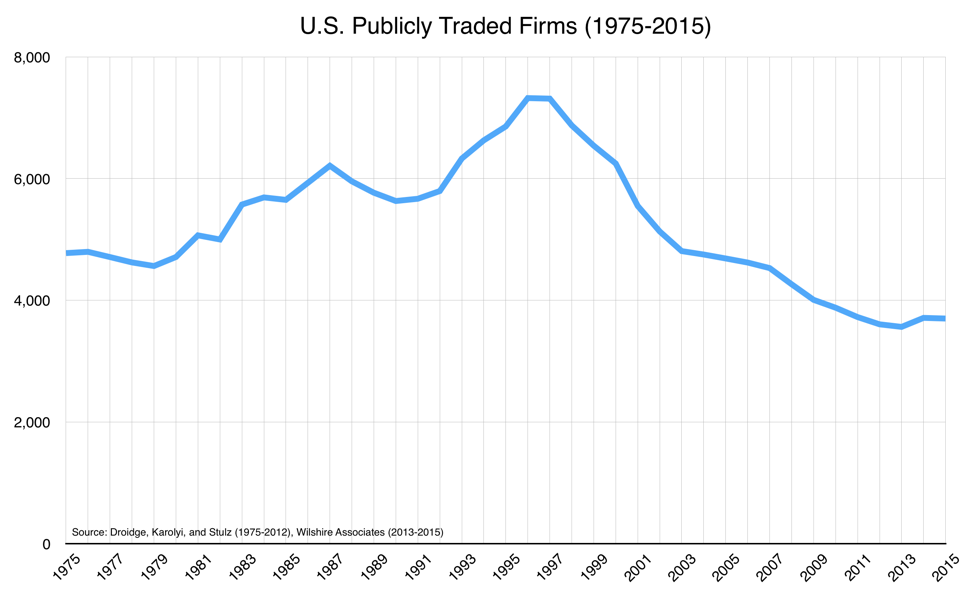 There’s been an initial public offering (IPO) winter for the last 15 years. We know that Sarbanes-Oxley, the set of post-Enron financial regulations enacted in 2002, substantially boosted compliance burdens for public companies and, at the margin, discouraged listing publicly. But the drop in total public listings began before Sarbox and was in fact coincident with the late-1990s boom of technology IPOs. The mid-1990s peak of tech IPOs almost assuredly skews the chart, and yet the U.S. still has fewer public firms today than it did 40 years ago.

The mid-1990s peak of tech IPOs almost assuredly skews the chart, and yet the U.S. still has fewer public firms today than it did 40 years ago.

So I still have more questions than answers. For example:

Over the past few decades, the rate of new businesses formed in the U.S. has fallen. Is the plunge in the number of public firms partly a result of the slowing rate of net business starts? Or perhaps just the reverse: Is reduced new firm formation a function of a less healthy public equity market?

Does this represent a benign shift in the way companies are financed? In other words, are private markets – bank loans, venture capital, private equity – now so large and sophisticated that they can replace and compensate for shrinking public markets? Or are weaker public markets starving businesses of funding?

Is the drop a function of slower economic growth overall? Or is it a cause of slower growth? In a similar vein, is the drop a cause or effect of the recent productivity plunge?

Are there a significant number of foreign firms that used to be listed on U.S. stock markets now listed on their home markets?

Is the reduced number of public firms a result of a higher rate of mergers and acquisitions (M&A)? And if so, is higher M&A activity a secular shift in industrial organization? Or is it a response to policies that encourage M&A and discourage firm independence?

Does the knowledge economy, which rewards network effects and scale economies, tend toward a smaller number of winner-take-all firms? In a distinct but related phenomenon, might modern communications tools allow firms to more efficiently integrate than was previously possible? Or might these network and scale effects produce both winner-take-all mega-firms (Apple, Google) and also lots of complementary firms (start-up app developers, graphic designers, etc.), with the problem lying elsewhere?

Are private firms better at investing and innovating for the long term, given the regulatory incentives faced by public firms and investors to focus on the short term? (Sarbox and other “fair disclosure” [FD] rules, for example, are designed to increase transparency and provide a level information playing field for all investors. But in practice the FD paradigm concentrates information releases into discrete quarterly announcements. It thus may contribute to the dreaded “short-termism” – a myopic focus on next month’s earnings rather than long term innovation. Because real information is less available, it also encourages short-term quantitative computer trading over fundamental analysis and long-term investing.) If so, private firms may be a solution to the information desert afflicting public markets.

Is the public firm reduction concentrated in particular industries – manufacturing, retail, health care, finance, technology, etc.? Or is it spread evenly across industries?

Does globalization mean that former U.S. firms now spread around the world just aren’t replaced by domestic firms? The timing with the rise of China suggests perhaps this is a factor. And yet the world economy is not zero sum. Why couldn’t globalization, which allows for more specialization and growth, allow new types of American firms to replace the ones that “moved” abroad?

Is the tax code an important factor? For example, publicly traded firms fell after the 1986 tax reform (after which much income reporting was shifted away from corporate income and toward individual income), rose after the 1993 tax increase, and then fell again after the 1997 capital gains tax reduction. In addition, the U.S. corporate tax rate of 35% has, over time, become the highest in the developed world. We know U.S. firms keep several trillion dollars in retained earnings overseas because they can’t bring it home. Can corporate inversions, in which U.S. firms move abroad, at least notionally, often to escape punitive taxes, explain a significant part of the phenomenon?

How do fewer public firms affect R&D investment and employment? Is the fall in the labor force participation rate related?

What does the investment environment look like in a world of reduced public equity vehicles? How do equity markets behave with fewer domestic public firms but many more investors? How does this change affect individual retail investors, who don’t have much access to private markets, versus sophisticated investors who enjoy many more options, such as venture capital, private equity, M&A, and private credit?

The most comprehensive treatment of the topic comes from a paper by Gustavo Grullon, Yelena Larkin, and Roni Michaely. They attempt to tease out some, but not all, of these questions and focus especially on the market concentration issue. They find that “product market concentration has increased across most industries,” profits have increased because of “increased market power,” and “competition could have been fading over time.”

A new report from the White House Council of Economic Advisors picks up this theme and laments higher firm concentration and less competition in the U.S. economy. The CEA says more rigorous antitrust enforcement and agency specific regulation could help promote competition.

And yet the CEA report ignores perhaps the most important factor in falling competition: regulation itself. Dodd-Frank has made the big banks bigger and reduced the number of small community banks. The Affordable Care Act (ACA) accelerated the consolidation of hospitals, clinics, and other health care providers into massive health care systems. The ACA has also reduced product and supplier choice, and boosted premiums, in the health insurance market. Washington is trying its best to shut down private colleges and other non-traditional educational offerings. Its “war on coal” has been successful at killing coal companies and thus reducing energy competition. And the Federal Communications Commission’s new Title II net neutrality rules – which were designed for a monopoly industry! – are likely to discourage new entrants into the wired and wireless broadband arena. I could go on.

If Washington had set out to frustrate entrepreneurship, reduce competition, and discourage public equity financing, it would have enacted policies much like the ones of the last 15 years. The entire apparatus of regulation and taxation, taken as a whole, has slowed the economy and thus the diminished the possibilities for smaller competitive firms to get started, expand, and perhaps go public.

I still have lots of questions, and no one knows what the “correct” number of public firms is. But we’d get a much better picture of that number by freeing competitors to compete and allowing the market to fund firms with the best mix of financing.