U.S. Chamber of Commerce Foundation / What We Can Learn From Masdar City
General Foundation
July 30, 2015

What We Can Learn From Masdar City 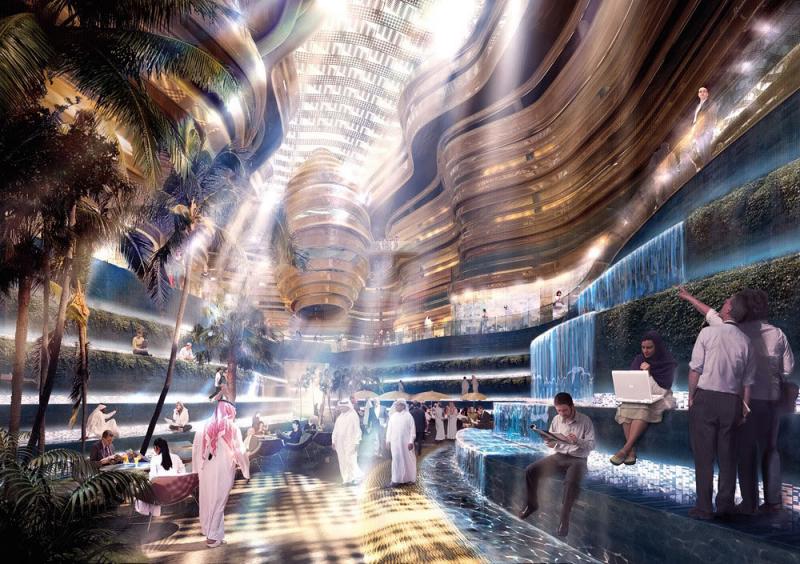 Masdar City, near Abu Dhabi, is serving as a model "zero carbon" city.

Masdar City, located just outside of Abu Dhabi, is the world’s first Zero-Carbon City. The enterprise, backed by the Mubadala Development Company, with support from the Abu Dhabi government, serves as the centerpiece for a new generation of sustainable communities.

Masdar’s meaning in Arabic is “the source,” which is very fitting for a city that hopes to define itself through renewable energy by changing the way cities are designed, built, and powered. This seems to be a very lofty goal for a city in the United Arab Emirates, a nation known for having the largest per-person ecological footprint in the world due to enormous oil production and recent construction booms in cities such as Dubai and Abu Dhabi.

The Masdar City project began in 2006, as an initiative and subsidiary of the Mubadala Development Company, a capital investment group focused on the diversification of the Abu Dhabi economy. The city will feature a solar-powered driverless car service, 130-foot wind towers, and other new prolific technologies to reduce human consumption and make the city more efficient. Masdar City will also be home to the headquarters of the International Renewable Energy Agency (IRENA).

Masdar’s designers first researched and toured ancient cities such as Muscat in Oman, Shibam in Yemen, and the densely populated Cairo in Egypt to gain a perspective on how to best construct a sustainable city in the Middle East. Their outcome was a design that combines ancient Arabic architecture with modern technology to utilize renewable energy and create the best possible layout for cities of the future. Masdar City has coined their design as a “greenprint” for cities of the future, claiming it is a way for cities to accommodate rapid urbanization while dramatically reducing energy, water, and waste.

Masdar City’s utilization of renewable energies draws primarily from solar energy produced by the Shams Solar Power Station, an over 87,000 panel solarfarm that lies beyond the city’s walls on 2.5 square kilometers of land. They also take advantage of wind energy with the construction of 130-foot wind towers that move air from above and convert it into a cool breeze blowing on the streets of Masdar, making temperatures within the city considerably cooler at around 70 degrees Fahrenheit compared to temperatures outside the city walls that often rise well over 100 degrees.

Buildings within the city are constructed using green materials and are designed to reduce energy and water consumption by about 40%. The buildings are also very close together, as to form narrow walkways that capture wind and provide shade for the primarily walking city. Another way the city combats the high temperatures of the region is by raising the entire foundation of the city slightly above surrounding land and building walls around the city to keep hot desert winds away. There are no light switches or water taps, as they are controlled by movement sensors, which greatly reduce electricity and water consumption. Masdar has also become home to the German engineering company, Siemens, whose Middle Eastern regional headquarters has won multiple international architecture awards for their sustainable and energy efficient office building. 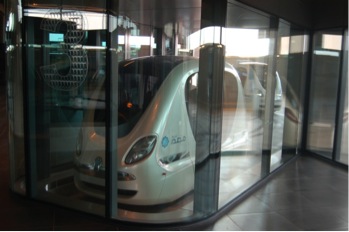 One of the main factors in Masdar’s forward-thinking city greenprint is to be an emissions-free and thus a car-free city. Vehicles entering Masdar City are parked on the outskirts, and on the inside there is a system of solar-powered urban transport driverless cars (pods) that move people around the city underground. Additionally, there is a light rail that runs above ground through the city. Private vehicles are restricted to parking lots outside the city, but with the readily available public transportation, there is no need for car-filled streets. This then allows for buildings to be closer together, and creates an all-around pedestrian friendly city.

Masdar City’s current population remains primarily based off of students and Siemens employees, but designers plan to gradually expand the city one neighborhood at a time. Expansion will be done by adding new businesses, apartments, schools, and more through economic incentives for businesses both large and small with an economic free zone. Masdar’s economic free zone allows businesses to be 100% foreign-owned, with the ability to move capital and profits outside the UAE without restrictions. Furthermore, the city boasts no import tariffs, corporate taxes, or individual taxes, and offers a competitive location in the Middle East only five minutes from Abu Dhabi airport and twenty minutes from Abu Dhabi downtown.

To encourage further economic prosperity and innovation, Masdar plans to add new K-12 schools, and become home to a permanent campus of The Emirates College of Technology. Masdar city currently boasts the top-ranking Masdar Institute of Science and Technology, which specializes in sustainability and renewable energies, but the city is continuously seeking new opportunities to grow. For Masdar City, that begins with education and research.

Dr. Belhoul continued, stating, “Together they will strengthen Masdar’s expanding ecosystem of innovation, by helping to equip the next generation with a solid educational foundation. As Masdar City grows, we are unlocking new talent and developing skills that support Abu Dhabi’s transition to a knowledge-based economy.”

Despite all of its revolutionary breakthroughs, Masdar City still has quite a ways to go to reach their founders’ ambitious goals of housing 40,000 people and having 50,000 more commuting to work. The amount of capital and resources put into Masdar City can make one question the value of creating new cities and communities rather than investing in making our current cities more sustainable and efficient.

Steve Geiger, co-founder and director of Masdar from 2006 to 2009, claimed, “[Masdar is] a fraction of what it was supposed to be back in 2006 when we announced it. …At the beginning of the project, nobody really anticipated how difficult it is to build a city.” Since its inception almost a decade ago, Masdar City has fallen short of becoming the future utopian city its designers planned, but it has opened the dialogue for reinvigorating our existing cities with new renewable energy technologies. Other cities have attempted to follow suit, such as the King Abdullah Economic City in Saudi Arabia focused around the King Abdullah University of Science and Technology, or South Korea’s construction of the Songdo International Business District, but none have been as progressive in engineering and demonstrating innovative solutions for the future of smart cities.

Masdar City was founded upon a renewable energy-focused university to invigorate the United Arab Emirates, as a platform for pivoting away from the Middle East’s oil-centric economy to benefiting future generations. The city has received numerous accolades, aside from being home to IRENA’s headquarters, they have earned endorsements from Greenpeace, the World Wildlife Foundation, and more. Masdar’s true success appears not to be in the creation of a new future-city, but in the project’s core—the continued innovations and research from universities like Masdar Institute, and starting the conversation on how technology can improve our cities and everyday life on a real-world scale.