Why The Value of Government Data Matters 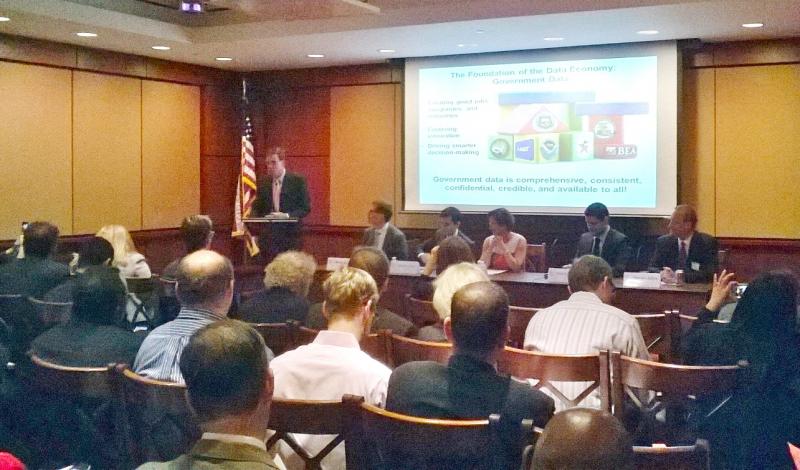 Register for our Oct. 7 Summit on the Future of Data-Driven Innovation.

The government currently has a lot of data.

Despite recent stories, not all of it is collected by the National Security Agency. The potential value of this data is large and growing. It already is the one of the chief sources of value for several private companies, including Weather.com and Zillow. It promises to increase government efficiency and democratic legitimacy by allowing government agencies deliver better services more cheaply and letting citizens see what government is doing.

A recent event sponsored by the Information Technology and Innovation Foundation, Creating Value from Government Data: The Next Wave of Data-Driven Innovation, explored both the promise of government data and its challenges.

The event opened with remarks by Sen. Mark Warner (D-VA). Senator Warner mentioned a number of initiatives he was working on to improve government performance. Each of these depends in some way on a better integration of data into decision making. For example, it is difficult to get accurate data about government budgeting when the Department of Defense alone has over 250 financial reporting systems. Another initiative would let prospective students look at the job success rate, average salary, cost, and average student debt associated with a degree from any college or training facility. These efforts are feasible, but until now it has been too hard to collect the data and ensure its quality.

Daniel Castro, director of the Center for Data Innovation, then moderated a panel of government and private sector experts. Mark Doms, Under Secretary of Commerce for Economic Affairs, spoke about the importance of federal data. A slide accompanying his presentation described government data as comprehensive, consistent, confidential, credible and available to all. Commenting on a report that the Department issued earlier this year on the value of government data, Doms noted that data is already driving the economy and that businesses rely heavily on government data, especially regarding population, the economy, and the weather. Access to free government data gas already enabled the creation of several new businesses. These companies are growing rapidly and create high-paying jobs. Doms stressed that the collection of this data was a good investment for the country. In later comments,  he suggested that government needed to partner with the private sector to get access to more real-time data, since official figures take a long time to compile.

Daniel Castro cited three reasons why alternative data sources are a good thing. First, they often produce data much faster than government. Second, they provide redundancy, since they often collect data from multiple sources. Third, they often provide greater coverage of the population, resulting in a bigger data set. These sources also have limits, however. They lack full coverage of the population and the interests of those collecting the data may not align with those who need it. Finally, the government is often the gold standard for quality and is needed to set the baseline.

Kathleen Phillips, Chief Operating Officer of Zillow, described her company’s use of data. Zillow collects data from a number of sources, including federal, state, and local governments. They then give this data to their users for free. Access to a number of data sources allows them to provide users with context about the data. For example, users can find out the sale price for other houses in a neighborhood, the quality of the school districts, and the crime rate. On the other end, the company is able to make predictions about what type of houses will appreciate fastest and about possible immigration trends by seeing at what houses people are looking at and the number of users from overseas.

Tom Schenk, Director of Analytics for the City of Chicago, described Chicago’s open data portal, which already links to over 600 data sets including energy use by Census block, water quality on the shores, and crime rates. Access to this data has already led to startups forming, including one that links salesmen for construction supplies with data about housing permits. News organizations are also using data to generate stories. Future plans include an Array of Things consisting of a mesh of sensors to collect detailed data on the local environment and the weather. Mr. Schenk, commented that Chicago is also a big user of federal data and that cutbacks leading to less detailed data collection were limiting the city’s information about its own local neighborhoods.

Steven Adler, Chief Information Strategist for IBM, spoke about how hackathons impressed him, both because private sector experts were willing to spend their time in an effort to make government better and because they were able to generate worthwhile applications in a matter of hours. Governments do not necessarily have to generate uses for the data, the private sector will often do that on its own once the data is available. IBM is currently experimenting with its own release of open data through a portal that anyone can access.

When asked what government can still do to help the private sector, Mark Doms mentioned the difficulty of keeping up with technological developments in the private sector. Mr. Schenk cited the need to listen to the private sector about what data it needs and what data is the most valuable and therefore should be released first. Ms. Phillips asked that government officials communicate more often about what data they have and what they could do with it. She also emphasized the need for standardization both within a single government entity and between jurisdictions. Finally, Mr. Adler advocated the publication of more open data by both public and private organizations.