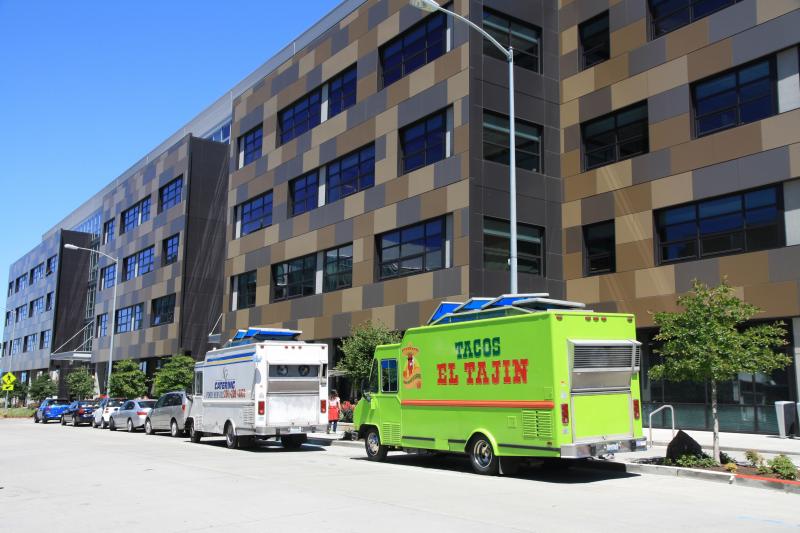 Food trucks line up outside the headquarters of Amazon in Seattle waiting for customers. Photo by James S. Russell, Bloomberg.

America’s founding as a food truck nation began in 2008 with Kogi, a Los Angeles-based mobile purveyor of Korean-Mexican fusion cuisine. Parked outside of a nightclub in the late hours, it soon began its tour of daylight streets. It announced every stop with a Tweet and a growing crowd in chase. By the end of Kogi’s first year of operation, its single truck was clearing $2 million in sales, a then-unheard of figure. Its success spawned imitators, who took to the streets in cities across the country. Government regulators, though, failed to adapt.

Food trucks are essentially mobile mini-kitchens. They appeal to a younger, hipper crowd with disposable income, while entrepreneurs see in them as a way to try out new foods without the costly bricks and mortar. Today’s trucks are noted for their social media savvy and their novel takes on casual cuisine. Their urban dwellings offer them space and cultural reserves to reach a concentrated, connected market base. In short, the most common ingredients of food truck nation are:

Food trucks appeal to a younger, hipper crowd with disposable income, while entrepreneurs see in them as a way to try out new foods without the costly bricks and mortar.

Food trucks are frequently begun by entrepreneurs and run as small businesses. Among the ranks of founders are concentrations of those who would not be out of place at a startup standing alongside those of more limited means and recent immigrants. As mobile cooking has grown, established restaurants have also picked up their own trucks, seeking to try out new food items or appeal to a new customer base.

Community is one other hallmark of mobile dining. It’s not just the foot traffic in walkable spaces and communal eating in public realms, but food trucks’ form of hyperlocal entrepreneurship that spills over into neighboring businesses across a city. Food trucks are community-driven economic development tools on four wheels.

Some 4,130 food trucks are driving the streets of nearly 300 American cities. Each truck brings in an average of $290,556. Forty-three percent of these revenues come from customers who are 25 to 44-years-old and another 20% from those under the age of 25.

Basic startup costs for a food truck run about $90,300. That $300 appended at the end of the figure represents baseline costs for permits and licenses. This is a misleading figure, since the bulk of a food truck’s regulatory expenses stem from lost time and revenue, legal fees, and mandated expenditures. Forbes columnist Natalie Sportelli detailed these barriers to entry:

On the surface it may seem like a cut and dry operation: a food truck parks and starts cooking. But food truck owners have to deal with obtaining pricey permits, truck maintenance and insurance, finding public or private parking spaces, storage spaces, prep kitchens, employee licenses, staff salaries, ingredient costs and more. To open your window will take months and can cost upwards of $125,000.

These regulatory barriers are believed to be slowing a once hot industry. Market research by IBISWorld found that “despite strong performance … high competition and unfavorable regulatory conditions in some cities have limited the growth of industry vendors.” Its report predicts that food truck growth will grind to a halt over the next few years. New trucks are expected to emerge at a rate of just 0.4% a year between now and 2020.

The food service sector has traditionally operated under strict, inflexible rules put in place with an eye on public health and safety. Food trucks similarly drive through a dizzying array of state and local regulations. With few exceptions, cities do not ban food trucks. Rather, they accumulate rules over how, where, and when food trucks may operate that, in aggregate, represent sizable barriers to entry.

Cities often slouch into stagnation by allowing pre-existing legal regimes to govern food trucks. Ice cream truck laws become food truck laws, for instance, as a path of least resistance. Regulatory regimes formed around established business models see incremental innovation as simply another form of non-compliance. Food trucks must then demonstrate why their business model is different enough to necessitate a new legal regime, and do so in the face of a path dependent public sector and wary competitors.

When new regulations enter the books, their sheer variance from city to city often betray their arbitrary nature. At times, they appear to arise at the behest of established firms seeking restrictions against newcomer food trucks. There is no assurance that a new regulatory regime will be a favorable one.

When new regulations enter the books, their sheer variance from city to city often betray their arbitrary nature. At times, they appear to arise at the behest of established firms seeking restrictions against newcomer food trucks. There is no assurance that a new regulatory regime will be a favorable one.

The friendliest cities to food trucks often had minimal regulations in place before Kogi came along in 2008. They simply ensured safe food handling and traffic safety. By avoiding detailed and specific regulations, these cities allowed culinary innovators to operate and grow.

Regulations tend to fall into the following categories:

These are rules that accumulate like pebbles in a stream. They may be large or small by themselves, but together may stem the flow of new business. Moreover, the irregularity of their placement and enforcement makes the effect of these rules hard to anticipate.

Onerous regulatory regimes are catching up with food trucks in many cities. Cities should instead seek to fulfill their essential duties—governing public spaces and protecting public health—while quickly freeing food trucks to operate.

There is widespread agreement that safety and cleanliness are important areas for regulators to address. On the other hand, permit caps, nearly any sort of bans, and most proximity restrictions tend to have a suffocating influence on food truck growth. As a rule, regulators should regulate less and listen more. Studying how vendors actually operate and customers respond to food trucks may help regulators proactively craft policies to encourage these culinary innovators.

Food trucks should be seen as additive, not subtractive from public life and private flourishing. With a better understanding of the regulatory burden on food trucks, America’s cities will be better equipped to encourage these roving innovators and their hungry customers.