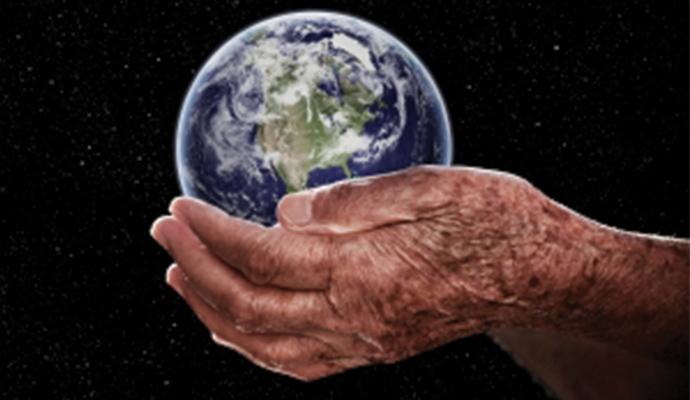 The Economist’s Buttonwood columnist asks the single most important question in the developed world: Where is growth going to come from? Growth is the only way to fundamentally increase employment and bring down debt burdens.

Growth will not come from demographic changes, for one thing. Birth rates are declining are have stabilized at low levels throughout the developed world, all while older generations are able to live on well into their retirement years.

If we can’t get growth from an increase in population, then what about from a rise in productivity? That prospect may be dimmer than we expect, according to a recent research report highlighted by The Economist.

“Mr. Nerbrand makes the assumption that worker productivity peaks somewhere between the ages of 30 and 50, and declines more quickly after the age of 55. On that basis, he thinks the most likely indicator of future changes in productivity will be what he dubs the grad-to-granny ratio: the relationship of those aged 20-29 to those aged 55-75. This ratio is declining almost everywhere in the world. By 2030 there will be only half as many grads as grannies in western Europe, and less than that in Japan.”

“It is all very well to describe a theoretical relationship between demography and productivity growth, but is there a link in practice? The sluggish performance of Japan’s economy over the past 20 years is well-known, although some would ascribe this to incompetent policy as much as demography. Nevertheless, as the chart shows, the country’s productivity has been growing more slowly over the past 30 years as Japan’s population has aged. The outlook, on Mr. Nerbrand’s analysis, is for a further deterioration.” 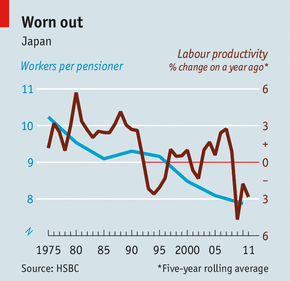 All is not lost though. Fortunately, there are other factors affecting productivity growth, namely technological change and structural reform. The difficulty in overcoming demographic challenges must be faced head on though.

“Technological change—3D printing and robotics, for example—or the emergence of shale oil and gas as cheap forms of energy may deliver a big boost. In Europe structural reforms, such as eliminating cartels or reducing labor-market distortions, may provide further momentum. Some countries could add many more women to the workforce; Italy has the fourth-lowest female employment rate in the OECD, for example. But if Mr. Nerbrand is right, then these factors will have to make a very big difference indeed for developed countries to overcome the burden of their ageing populations.”