Beyond STEM: Educating a Workforce of Thinkers and Doers 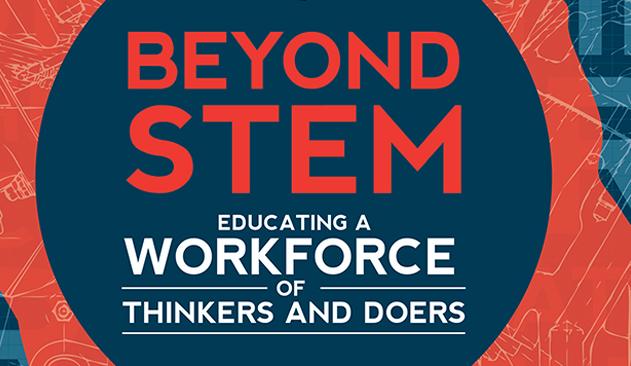 From where I sit, it feels like the study of the liberal arts and the culmination of that education—the liberal arts and sciences degrees—are being challenged like never before. State governors, top business executives, and parents are questioning the end products that come from liberal arts institutions. In a recent Washington Post article, a managing director of a major financial management company complained that a liberal arts education mainly created “incredibly interesting, well-rounded cocktail party guests” but not graduates who are likely to find jobs.

Unfortunately,  I think that a too-narrow focus on first jobs for graduates has these folks missing the bigger point—liberal arts institutions educate for employment, but they also educate for success. That’s the “plus” in our system, our game changer, and I will come back to that later.

I must say that the frustration of critics is completely understandable: unemployment rates remain high, and college education, already shockingly expensive, is growing ever more so. Students are graduating with unprecedented debt. People are concerned about the value—the return on investment of a college degree. It’s no surprise to me when high school students and their parents approach our admissions counselors asking, “So, what kind of job will Susie be able to get with her bachelor of arts degree?” or more pointedly, “Do you offer STEM education?”

Without question, STEM (science, technology, engineering, and mathematics) is the new buzzword for those anxious about post-graduation employment. These are all disciplines in which America must excel if it is to retain its industrial and economic strength. In his February 2013 State of the Union address, President Obama urged that we double-down on science and technology education starting in our secondary schools. To give the argument even more traction, some would widen the list of STEM professions to include educators, technicians, managers, social scientists, and health care professionals. Indeed, the talk these days in my state of Virginia is about STEM-H (for healthcare).

According to the U.S. Department of Commerce, the STEM job sector is growing at twice the rate of non-STEM occupations, but we should note some caveats. First, let’s remember that STEM workers, as identified by the Commerce Department, comprise only 5.5% of the workforce. Second, while STEM workers overall may earn 26% more than their counterparts, the greatest differential is seen in the lowest-level jobs; the higher the terminal degree, the less the earnings difference.1

Moreover, it is not a given that the only path to STEM job success is to obtain a STEM degree. About one-third of college-educated workers in STEM professions do not hold degrees in STEM. Two-thirds of people holding STEM undergraduate degrees work in non-STEM jobs. One-fifth of math majors, for instance, end up working in education. (That is a good thing, I would argue.)2  Nearly 40% of STEM managers hold non-STEM degrees.3  This data points to one of the realities of college and career: the workplace is flexible, vibrant, and often unpredictable—a moving target, if you will. It is a place where, over a lifetime, a college graduate will hold multiple jobs and may even see multiple careers.4

Take Stephen Northcutt, a graduate of my university, Mary Washington in Fredericksburg, Virginia, who is now the president and CEO of The Escal Institute of Advanced Technologies. Before he began working in computer security, before he even went to college, Stephen was a Navy helicopter rescue crewman. Later, he became a whitewater raft guide, a chef, an instructor in the martial arts, a cartographer, and a network designer. Stephen came to Mary Washington to study geology, but then he became intrigued by geodetics, or global mapping. His real strength, it turns out, was not in the technical arena. As one of Stephen’s professors said, “Stephen’s real strong point was being able to analyze the situation and know what to do.”

That’s important: numerous biographies and résumés of technology executives illustrate that even in the tech fields, the rise to the top is facilitated by non-tech degrees. A study of technology company startups by researchers at Harvard and Duke found that 47% of their CEOs and CTOs had terminal degrees in STEM subjects, but 53% had degrees in a variety of other fields—including finance, arts and humanities, business, law, and health care.5

Moreover, the CEOs of Dell, JP Morgan Chase, Walt Disney, IBM, and FedEx all have liberal arts educations.6  It’s also worth noting that Gen. Martin Dempsey, the chairman of the Joint Chiefs of Staff, and Harold Varmus, the director of the National Cancer Institute, both were English majors.7 Even Admiral William McRaven, the Commander of U.S. Special Operations Command, has a degree in journalism.

Why is this? We think it’s because the people who run things—whether divisions, departments, companies, or state governments—are integrators and synthesizers.

New York Times columnist Thomas Friedman recently updated his book, The World is Flat. He said, “I added a whole section on why liberal arts are more important than ever. It’s not that I don’t think math and science are important. They still are. But more than ever our secret sauce comes from our ability to integrate art, science, music, and literature with the hard sciences. That’s what produces an iPod revolution or a Google.”8

Virginia Governor Bob McDonnell recently invited a group of higher education leaders throughout the state to meet with five CEOs of major businesses. The idea was to have the CEOs tell us what they were looking for in college graduates. Not surprisingly, there was a chorus of approval for STEM education. The last CEO who spoke was, to my mind, a bit more strategic in her presentation. She told us that specific STEM degrees are impressive, but what her company needs most are the skills and abilities that STEM graduates learn in those disciplines, such as the ability to think critically, how to work in teams, how to communicate effectively, and how to retrieve and analyze data. In other words, this employer is looking for the types of graduates we produce in our arts and sciences institutions.

Her presentation mirrored what we have been hearing for years: CEOs and recruiters say they value occupational skills secondarily; what they value more is broader intelligence. A survey by the Association of American Colleges and Universities found that business recruiters value critical thinking, analytical ability, teamwork, and communications ability, as well as job skills, in their new hires.9

To this list I would add the ability to innovate, assimilate, and integrate across disciplines. In my own hiring, I look for creativity, optimism, and interpersonal skills as well.

You can probably see where I am heading as I circle back to the idea that liberal arts institutions are being challenged. By inference, at least, the institution that I lead, the University of Mary Washington, is one of them. First, let’s not forget that these schools are properly colleges of the liberal arts and sciences. Far too often in casual writing and conversation, the “sciences” part is left off of that phrase.

Like most liberal arts and sciences universities, Mary Washington offers a vigorous STEM curriculum. We offer degrees in math and science, including biology, chemistry, computer science, geographic information systems, environmental science, geology, physics, as well as the social sciences, business, and education (teaching). We are also pre-law and pre-med.

To those high school students and parents who ask, “Do you offer STEM,” I tell them, “Better yet, we offer STEM-Plus.”

Our STEM education is built on a broad foundation that exposes students to the arts, humanities, and social sciences. Our pure and applied science and math disciplines are all built upon our core liberal arts foundation. That’s the plus part, and it makes the ultimate difference.

We all know that the liberal arts and sciences prepare us to be better citizens, to help us understand ourselves and others. They also prepare us for business and careers. We see our university shaping the workforce of the nation and the world, providing America with graduates who have specific expertise in whatever field they choose. If it is science or technology, they will possess the ability—and I am quoting from our academic catalog here—to “understand, evaluate, articulate, and advance their ideas and the ideas of others.”10  This comes from the foundation of our general education program.

The value of marrying a broad liberal foundation to the specific scientific or technical one is not lost on others. For many years, a registered nurse (RN) license was achievable through two years of specialized study at a community college or hospital setting. Recent reports from the Institute of Medicine and the Carnegie Foundation for the Advancement of Teaching have linked the education level of nurses to improved patient outcomes. As a result, the Bachelor of Science in Nursing is becoming the must-have degree. Nearly 40% of hospitals and clinics are setting requirements that new hires have a bachelor’s degree in nursing, while 77% express a strong preference for this level of education, according to the American Association of Colleges of Nursing.11

In Virginia, the University of Virginia and Virginia Commonwealth University are accepting RNs, allowing them to take additional coursework—much of it in the core liberal arts—and rewarding their work with a Bachelor of Science in Nursing degree. Mary Washington plans to join them.

Elsewhere, Louisiana Tech and the University of Kentucky have created new programs to help math and science students move into teaching science and math. Georgia Tech, well known for its exemplary engineering programs, has taken a somewhat different tack. Its president became worried that his graduates were too narrowly focused, so he asked that admissions policies be altered to invite more students who had played musical instruments, sung in a chorus, or played on a sports team. He reorganized the computer science curriculum to combine it with nine other fields to create an “orchestra” of synthesis.12  One might say that Georgia Tech is “liberalizing” its engineering degree.

Georgia Tech’s president could have taken his direction from Steve Jobs, perhaps the ultimate techno-geek. Here’s what Jobs told us when he rolled out the iPad 2: “It is in Apple’s DNA that technology alone is not enough. It’s technology married with liberal arts, married with humanities, that yields the results that make our hearts sing.”

Jobs never got a college degree. He dropped out of Reed College his freshman year, but his interest in the liberal arts did not wane. He audited classes in calligraphy, and the sense of design he learned there found its way into the Mac. Even more important, Jobs became convinced that the greatest achievements of his businesses would take place when computer scientists worked alongside artists and designers, and he designed his workplaces so that people with these diverse intellects would be forced to rub shoulders. “One of the greatest achievements at Pixar was that we brought these two cultures together and got them working side by side,” Jobs said in 2003.13

So who brings together the scientists, the engineers, the designers, and humanists? I think you know by now what I believe. Not every one of our graduates will go on to be a Steve Jobs, but we know that they will be bigger, broader, and more creative and fearless thinkers and doers. That’s what America needs most.

1 STEM: Good Jobs Now and for the Future, U.S. Department of Commerce, http://www.esa.doc.gov/sites/default/files/legacy/foundation/reports/documents/stemfinalyjuly14_1.pdf

7 Danielle Allen, The humanities are just as important as STEM classes, The Washington Post, Feb. 14, 2013

11 American Association of Colleges of Nursing, Expectations for Practice Experiences in the RN to Baccalaureate Curriculum, http://www.aacn.nche.edu/aacn-publications/white-papers/RN-BSN-White-Paper.pdf

12 Online book summary for The World is Flat, TheBestNotes.com, http://thebestnotes.com/booknotes/World_Is_Flat_Friedman/World_Is_Flat_Study_Guide07.html 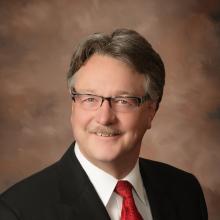