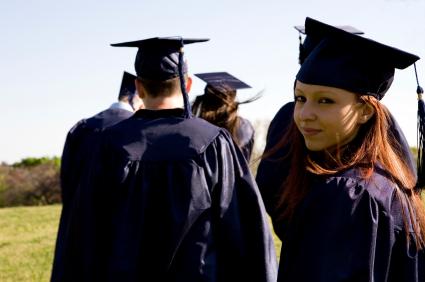 What if I told you there are programs available to public high school students that would allow them to complete two years of college while working towards their high school diploma? What if I also said that these students have 98%–100% high school graduation rates and 87% associates’ degree attainment rates? In addition, 96% of those students who go on to achieve a bachelor’s degree recieve one within six years, compared to the national average of only 58%. These impressive outcomes-based stats are matched with significant savings: up to approximately $27,000 for students who attend public colleges and $72,600 for students at private colleges. Impossible, you say? Luckily, we have the proof of programs like Bard High School Early College (BHSEC) to show us how it’s done—and tuition free no less.

In 2001, Bard College partnered with the New York City Department of Education to create BHSEC Manhattan. BHSEC offers a liberal arts and sciences college education through small classes taught by accomplished college faculty. Since that time, two more BHSECs have opened (Queens, NY and Newark, NJ) and an early college partnership with Bard has been established in New Orleans. Bard’s student demographics vary by campus—from 50% white in Manhattan to 96% African American in New Orleans—and many students will be among the first in their families to earn a college degree. In addition to helping students afford postsecondary education, Bard’s early colleges help students develop the critical thinking, writing, and analytical skills and the educational foundation necessary to succeed in college and the workforce.

“The best thing about the BHSECs, in addition to the savings to families and government, is their transformative impact on students’ lives," said Martha Olson, Bard’s Dean of Education Initiatives and administrator of the BHSEC schools. "The BHSECs give students the tools they need not just to excel in college, but to become leaders in their chosen fields and the problem solvers and decision makers our economy needs to thrive. Early colleges' ability to help students, especially from traditionally underrepresented backgrounds compete and succeed, has enormous benefits for students, their families, and our society."

Average Cost of 2 Years of College (for Institutions) 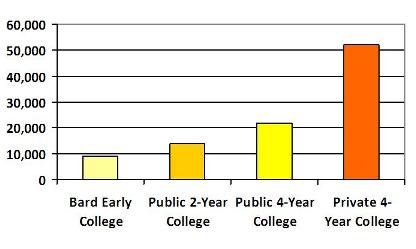 It costs public two- and four-year colleges about $14,000 and $22,000 per student, respectively, to offer an associate’s degree, compared to the average $9,000 per student cost (which Bard raises in addition to public funds for high school) in Bard’s early colleges. Furthermore, the government saves money due to the absence of remedial education needs among college-bound students, reduced time to degree completion, and increased graduation rates. Bard’s early colleges demonstrate how to increase quality and efficiency by breaking down funding and structural silos.

Bard’s program is working—but its impact could be far greater if policy and funding incentives allowed it to be brought to scale nationwide.