Leaders and Laggards: A State-by-State Report Card on Educational Effectiveness 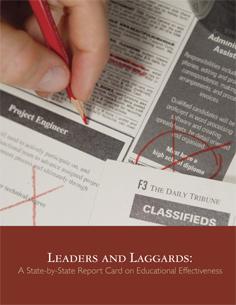 The United States in the 21st century faces unprecedented economic and social challenges, ranging from the forces of global competition to the
impending retirement of 77 million baby boomers. Succeeding in this new era will require our children to be prepared for the intellectual demands of the modern workplace and a far more complex society. Yet the evidence indicates that our country is not ready. Despite decades of reform efforts and many trillions of dollars in public investment, U.S. schools are not equipping our children with the skills and knowledge they—and the nation—so badly need.

It has been nearly a quarter century since the seminal report A Nation at Risk was issued in 1983. Since that time, a knowledge-based economy has emerged, the Internet has reshaped commerce and communication, exemplars of creative commerce like Microsoft, eBay, and Southwest Airlines have revolutionized the way we live, and the global economy has undergone wrenching change. Throughout that period, education spending has steadily increased and rafts of wellintentioned school reforms have come and gone. But student achievement has remained stagnant, and our K–12 schools have stayed remarkably unchanged—preserving, as if in amber, the routines, culture, and operations of an obsolete 1930s manufacturing plant.

The measures of our educational shortcomings are stark indeed; most 4th and 8th graders are not proficient in either reading or mathematics. Only about two-thirds of all 9th graders graduate from high school within four years. And those students who do receive diplomas are too often unprepared for college or the modern workplace.

Despite such grim data, for too long the business community has been willing to leave education to the politicians and the educators—standing aside and contenting itself with offers of money, support, and goodwill. But each passing year makes it clear that more, much more, is needed. America’s dynamic, immensely productive private sector is the envy of the world. Are there ways in which business expertise, dynamism, accountability, and problem solving could improve our schools? What  would a business plan for reform include?

With these questions in mind, in 2006 the U.S. Chamber of Commerce launched an effort to dig deeper into the nation’s educational effectiveness. We began with the premise that national statistics, while important for sketching the challenges ahead, mask tremendous variations in educational outcomes and delivery from state to state. It is the states, after all, that are ultimately responsible—both constitutionally and practically—for the quality of schooling. We decided on the following goal: to grade all 50 states and Washington, DC, on their K–12 school systems in order to identify both leaders and laggards in the tough business of school performance.

A Look Back at This Year's Impact in Preparation for 2023
U.S. Chamber of Commerce Foundation Launches ‘Design Challenge’ to Improve Public Education in America
Roadmap to Building An Equity-Driven Workforce