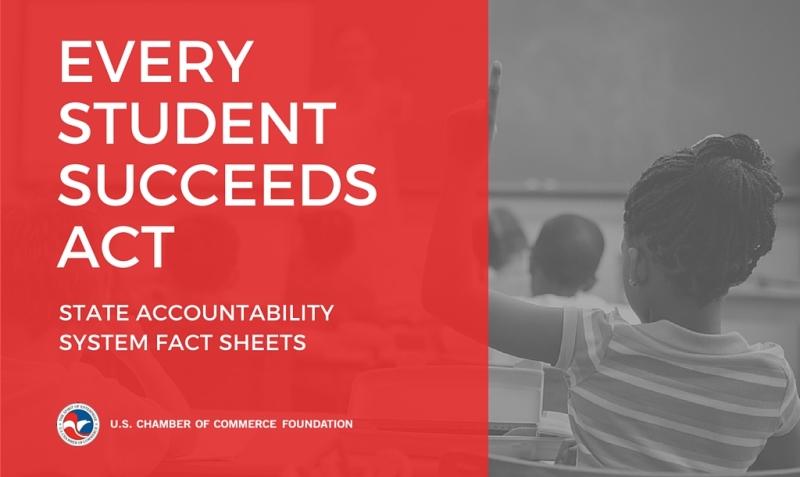 In December 2015, Congress passed the Every Student Succeeds Act (ESSA), returning power back to the states for the creation of their education accountability systems. States now have a tremendous opportunity to involve a diverse group of business and community leaders in the development of ambitious goals and metrics for their unique student population and economic environment. This new law replaces the No Child Left Behind Act (NCLB), which has been in place since 2002. The biggest shift in ESSA is that the law gives much greater flexibility for the design of statewide accountability systems. The law does preserve the requirement for states to have a system that addresses data by race, income and learning needs; to test in at least math and reading in grades 3-8 and once in high school as well as science in grade spans, and to identify low-performing schools requiring intervention.

The U.S. Chamber of Commerce as well as many state and local chambers across the country, have a long and successful history of advocating on behalf of rigorous academic expectations for all students to prepare them for college and career. In the next two years, the business community has an important role to play in ensuring that every state sets high goals and puts a plan in place to measure and meet those goals. Despite giving states more control, ESSA does require the following:

Prior to the passage of ESSA, NCLB required states to make adequate yearly progress toward 100 percent student proficiency in English/language arts and math on state tests by the 2013-2014 school year; otherwise, schools were deemed “in need of improvement” and subject to consequences. In 2011, the U.S. Department of Education implemented a waiver program offering states the opportunity to apply for flexibility from key provisions of the law. In exchange for additional prescriptive federal requirements, states that received a waiver had more flexibility in setting goals for schools, determining how to measure school performance, and identifying which schools needed additional support.

The U.S. Department of Education has already begun the rulemaking process to develop ESSA regulations and guidance. It is important that the business community is engaged in this process leading up to the 2017-2018 timeline for when states must implement a new accountability system. The business community can and should be a vocal advocate for the necessary elements of an accountability system that ensures all students are receiving a high-quality education that will prepare them for college and the demands of today’s workforce.