The Rewards of Early Childhood Investment 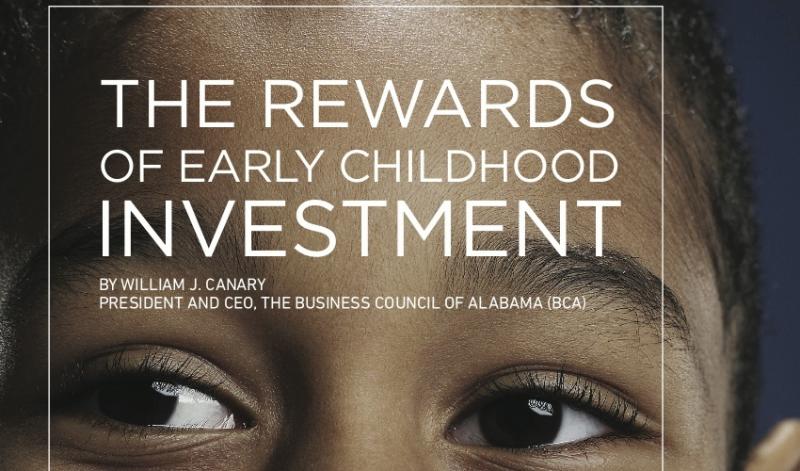 Alabama business leaders agree that increasing the education investment in our youngest children is and will continue to be a top state priority. This belief picked up steam seven years ago when others and I started advocating early childhood education investment as a way to combat the alarming school dropout rate and the inability of some children to get significant work or continue their educations after high school—if they finished high school at all.

It is in the best interest of business to invest in quality early education, since business is the greatest consumer of our education system, seeking students who can lead productive lives through more secure futures after their initial education ends.

In 2007, former Miami Herald publisher David Lawrence Jr., an early childhood education advocate, was recommended to me. He had an incredible message: present education to children at an early age and not only will they excel, but as adults, they will also be productive citizens.

Lawrence was instrumental in Florida passing a statewide constitutional amendment in 2002 to provide pre-kindergarten for all 4-year-olds. His was an enlightening experience for the Business Council of Alabama (BCA), the state’s leading business advocacy organization, of which I serve as the board of directors president and chief executive officer. In Alabama, it was like a light switched on. As a business advocacy organization, we knew that the future of economic success and prosperity depended on the education we provide our children today.

Alabama is blessed with major enterprises, including automotive manufacturers Mercedes-Benz, Hyundai, Honda, and Toyota engines; Austal, a naval warship builder; research and development work done by Boeing in Huntsville; a world-class medical center at the University of Alabama at Birmingham; and now a premier commercial passenger aircraft manufacturer in Airbus that is about to begin assembling up to 50 modern jets a year in Mobile.

For any of these enterprises to have a long and successful future in our state, they need to have access to world- class talent, which begs the question, “Where will the employees come from to fill those demanding and highly skilled jobs?”

It became a responsibility of the business community to engage in preparing our students for bright futures, not dismal failure. Our board of directors showed a keen interest and took action. We urged state funding for a total voluntary pre-kindergarten for Alabama’s 4-year- olds. We had a long way to catch up. In 2012, only 6% of approximately 68,000 4-year-olds were enrolled in Pre-K, not including Head Start, the federally funded assistance program for low-income families.

Now, thanks to the 2013 and 2014 legislatures and the signatures of Gov. Robert Bentley, the appropriation increased by about $19 million to $38.5 million over 2 years, more than doubling the funding available for our program (First Class Pre-K) within the Office of School Readiness.

In 2009, we hosted a business leadership summit on early childhood education with Robert Dugger and Governor Bob Riley as our keynote speakers. Dugger, an investment manager, an is co-chair of the Advisory Board for ReadyNation, a business group advocating for early child care and education programs.

After his energetic kickoff of the effort, Governor Riley took the ball and ran with it, announcing his plans to expand voluntary pre-kindergarten education in Alabama to benefit more 4-year-olds, an accomplishment that would change Alabama’s history.

The program, called First Class, would ultimately build on the state’s existing Pre-K program, which has been rated the best in the nation by the National Institute for Early Education Research for its high quality standards.

In Birmingham, the summit was a full action-planning day and included business, education, and child education advocacy groups. This collaboration would establish pre- kindergarten as a fundamental piece of the foundation for adequate early childhood development in Alabama.

We knew this effort had to be broader than just the BCA. Fortunately, we had board of directors’ member Bob Powers, the BCA’s Education Committee chairman and a supporter of our educational role in the childhood education arena. Powers ran with our theory that if you can bring a child into school prepared, his or her chance of success is greatly enhanced. The BCA helped fund a study on early childhood education and presented it to the State Legislature for action. The concept was that in order to compete in today’s economy, every person moving into the career-ready workforce needed to have at least a 13-grade education.

The Public Research Council of Alabama, in partnership with the Office of School Readiness and the Alabama Department of Children’s Affairs, concluded that students participating in Alabama’s First Class Pre-K program academically outperformed their peers once they reached elementary school. PARCA said advantages in Pre-K participation persist at least through the sixth grade.

In a New York Times article last year featuring Alabama’s top rated Pre-K program, Alabama School Readiness Alliance (ASRA) Executive Director Allison de la Torre said Alabama is trying to invest in a workforce that, within 20 years, will be able to compete with other states and other nations.

BCA is a proud partner with, and an investor in, ASRA. For years, expanding Alabama’s Pre-K has been a top priority of the BCA. Alabama already had the award-winning Alabama Reading Initiative. It’s being enhanced with related early childhood education ventures. And that takes money.

To give children a quality and meaningful education, the funding goal has been to secure anywhere from $10 million to $13 million more each year, with a target of about $120 million a year for a fully funded, voluntary Pre-K. This year, the Alabama legislature appropriated an additional $10 million to the program.

As President and CEO for the BCA, I give about 40 speeches a year throughout the state and about 4 or 5 outside it. A common theme I mention in each of those remarks is early childhood education and career readiness. In one of those speeches this year, delivered to a chamber of commerce group in Selma, I said the theory of early childhood education isn’t very complicated; it’s only good stuff.

Here’s a good-stuff statistic. The National Conference of State Legislatures cites a Minneapolis Federal Reserve Bank paper showing a rate of return of more than $8 for every $1 invested in early education in Minnesota. Children with quality early learning opportunities are more likely to read at grade level, graduate from high school, earn more money, and contribute more tax dollars. This is a win-win scenario for everyone. 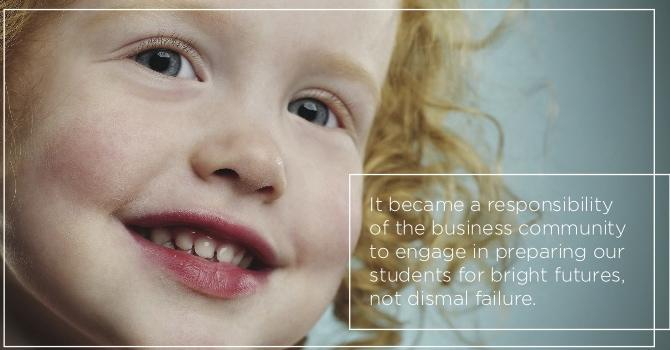 But here’s a startling national statistic. Every 26 seconds, a child drops out of school. That’s 1.2 million a year, as sobering a statistic as that cited in the excellent 2010 documentary “Waiting for Superman,” where one school saw that of the 60,000 students going through its doors, 40,000 dropped out. That 40,000 is kryptonite to any measure of progress.

As business leaders in our State, we see our role as having a significant effect in defeating that dropout rate and in enabling students to read and gain access to the workforce. Our voluntary Pre-K has them reading at grade-level by the third grade, and we’re talking 100% of them. We complement it with science, technology, engineering, and mathematics (STEM), our ACCESS Distance Learning, and by highlighting robotics in our high schools.

It’s not just for 4-year-olds. The BCA also helped develop a dual-enrollment program for qualified high school students to enroll in two-year schools to learn a skilled trade. They graduate with a high school diploma and a two-year technical degree with the opportunity to immediately go to work or seek more education, or both.

Legislation this year authorizes limited tax credits for personal or corporate donations to the dual-enrollment scholarship program. The legislation caps the scholarship fund at $10 million, an amount that will allow 9,542 new students to participate in dual-enrollment.

We supported Alabama Future Workforce Initiative legislation because it will help students gain the skills and education that business needs and secures our state’s future with some of the country’s and world’s most important enterprises.

In addition, the BCA in 2011 created the Manufacturing Advocacy Council (MAC). It is a select group of members with the experience, skill, and an innate understanding of the manufacturing process that helps promote and enhance a positive business message for state manufacturers.

The MAC is comprised of a cross-section of Alabama’s manufacturing community, manufacturers who are members of BCA (which is a significant part of our membership), its board of directors, and members of its regional advisory committees.

Investing in What Works

Alabama’s leaders are investing in high-quality Pre-K because they know it works. Just as builders who work with mortar and stone use pillars to support a structure down to its foundation, in much the same way, the business community is working to make economic development and education the pillars of Alabama’s free- market success.

This holistic approach is probably the best way to dramatically reduce the dropout rate while making a difference in the lives of students and their families. We believe that no person stands taller than when he or she bends over to pick up a child.

Knowing that people come and go, last year we created a lasting foundation to perpetuate the holistic approach to total childhood education. The foundation is the Business Education Alliance of Alabama. Its chairman and president is Dr. Joseph Morton, the outstanding former state superintendent of education. Assisting Morton is Montgomery businessman Jay Love, a former state legislator who had headed the important and powerful House Ways and Means Education Fund Committee.

You need to have something to continue efforts to transcend current personnel. A foundation is exactly that vehicle.

Many are surprised that a group representing businesses (ranging from Alabama’s largest manufacturers to “Main Street” storefronts) focuses so much of its attention on public education, but the reason is actually quite simple.

The business community in Alabama is, by far, the largest consumer of a product called education, so it is imperative that we work hard to improve it so all of Alabama’s graduates possess the skills and education that the 21st century workplace demands.

The story of the entrepreneurial spirit, visionary leadership and corporate citizenship all begin in a classroom. Investing in our children is a one of our greatest achievements.

As President Theodore Roosevelt once said, “Far and away the best prize that life offers is the chance to work hard at work worth doing.” 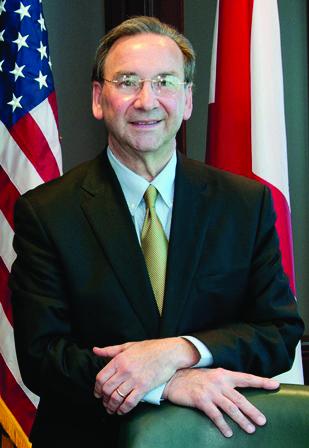 William J. Canary is President and CEO of the Business Council of Alabama (BCA), the state’s foremost advocate for business.