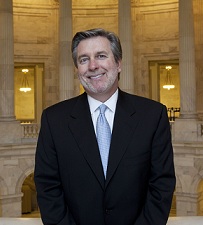 Scott W. Reed is the senior political strategist at the U.S. Chamber of Commerce. He is responsible for overseeing the 2012 federal voter education program.

Reed is also founder and chairman of Chesapeake Enterprises, a Washington-based consulting firm specializing in federal and state legislative, regulatory, and governmental matters for corporate clients.

Reed was campaign manager for Bob Dole’s 1996 presidential campaign. He oversaw the national campaign, which included political strategy, policy development, communications, and advertising during the GOP primary and the general election. In addition, he directed preparations for the 1996 Republican National Convention in San Diego and the vice presidential selection process of Jack Kemp.

In 1993, Reed was appointed executive director of the Republican National Committee. He served as chief operating officer of the GOP during the historic elections in 1993 and 1994 when the Republicans gained control of both the House and the Senate for the first time in more than 40 years. Reed implemented a state-by-state effort that succeeded in electing 32 Republican governors.

During the Bush administration, Reed served as chief of staff to Secretary Jack Kemp at the Department of Housing and Urban Development. He directed personnel, political, and policy matters, employing a long-term empowerment and privatization program.