Data Transparency and its Surprising Implications 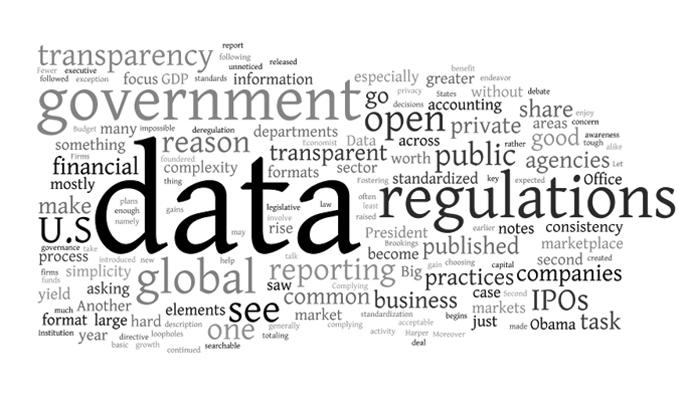 Fewer companies are choosing to go public in the United States—and one surprising reason for this has to do with data transparency.

One explanation for this declining share of IPOs is the growth in emerging markets. Companies are following capital flows directly to their doorstep. Another reason is the growing complexity in the U.S. financial marketplace. This latter reason is what I want to focus on, because it’s not just that accounting standards have become more complex, but that it’s harder than ever to deal with that complexity. It’s just difficult to figure out the exceptions and loopholes in U.S. law. Complying with these regulations is tough enough—the cost is even worse, totaling some $35 billion a year. That’s more in costs than what’s raised annually by IPOs since 2000 (with the sole exception of 2007).

Public data is frankly a mess. Crucial public information is hard to access, especially so in the case of regulations. Data needed to make decisions is sometimes released inconsistently—or not at all.

While there’s a case here for deregulation or at least of regulatory simplicity, there’s another angle to take. What if regulations were published with consistency and in a standard process? What if reporting was straightforward and simple?

The government could adopt common data formats across its maze of agencies and departments. We’d see legislative activity and judicial documents, program performance data and mandated disclosures published in standardized formats and places.  The upside would be that Big Data begins to tackle Big Government, to the benefit of consumers and companies alike.

Fostering greater openness and consistency with regulation information and reporting requirements is not an impossible task, though it is certainly a large one. The potential gains make such an endeavor worth considering. Indeed, President Obama and Speaker Boehner have backed various transparency initiatives, but they have mostly foundered for lack of generally acceptable data practices.

First, we’d see a direct impact on the ease of doing business in America. This especially relates to starting a business and complying with basic regulations. Firms would also enjoy greater market awareness.

Let’s go back to the earlier reference to the financial sector. Onerous regulations imposed without simplicity and transparency in data only serve to increase the opportunity for fraud and irregularities to continue unnoticed—the very things these regulations often work to prevent.

Second, as The Economist notes, “Combining data from multiple sources will yield fresh insights.” Initiatives like Spendopedia help us gain a tiny sense as to the new opportunities open and transparent data could yield. And as Jim Harper notes, “The use of good data in some areas will draw demands for more good data in other areas, and many elements of governance and public debate will improve.”

How to go about this? The first order of business would be to create a common format for regulations to be published in. Basic data elements would be made consistent across all grants and contracts or in agency regulations. Most importantly, it would all have to be readily searchable. The second task would involve developing common reporting forms for companies.

Cato’s 2011 report on “data practices for transparent government” is worth reading for its description of the key data practices that should be followed; namely, “authoritative sourcing, availability, machine-discoverability, and machine-readability.”

Who could coordinate such a task? The Office of Information and Regulatory Affairs (OIRA), for one, is well-placed to introduce standardized and open data in the government. Another is the Office of Management and Budget (OMB), which under President Obama has already issued a directive calling on executive departments and agencies to become more transparent, participatory and collaborative. Specifically, they should produce “open government plans” and release “high-value data.”

Looking to other countries, we see how such a process would occur. In Australia, the government created a Standard Business Reporting (SBR) format, which is expected to save $500 million a year in public funds. The Netherlands introduced something similar for the reporting of financial data called the Dutch Taxonomy Project.

Why don’t we see open data coursing through our own government? For one thing, it’s a formidable challenge to make competing agencies talk to each other (let alone agree on something). Moreover, there’s not a natural, cohesive constituency for open data in government. Finally, we see many with real privacy concerns. It’s here that I’d point to Benjamin Wittes of The Brookings Institution, who said, “We are asking not necessarily that our data remain private; we are asking, rather, that they not be used as a sword against us without good reason.” That should be the overarching focus of any concern over transparency.

It’s here that we return to the global marketplace. Consistency and standardization may be hard principles to apply to government, but they are absolutely necessary in the private sector. It’s unfortunate that markets should be that much narrower because of such low-hanging fruit for reform.