U.S. Chamber of Commerce Foundation / Foundation Praises Utah as 'Back to Back' Champion

Foundation Praises Utah as 'Back to Back' Champion 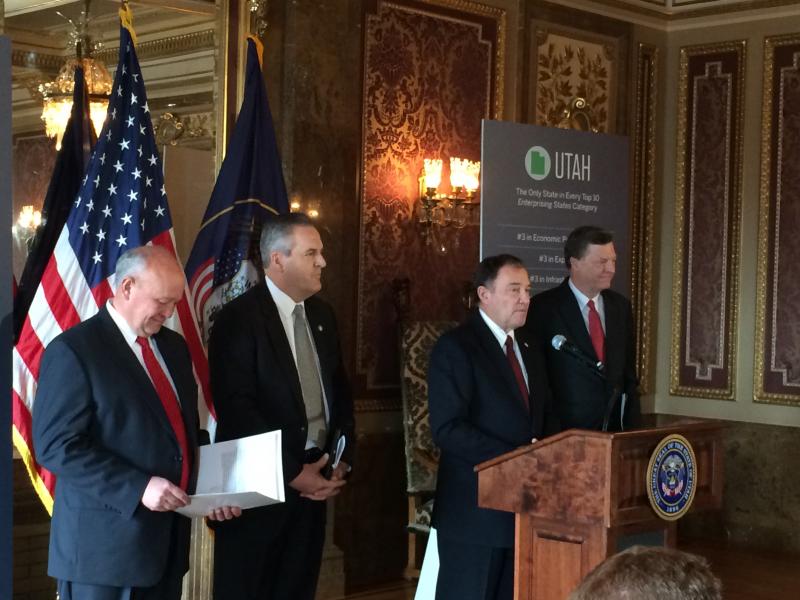 SALT LAKE CITY, UTAH - The U.S. Chamber of Commerce Foundation praised political and business leaders in Utah for their collaborative approach to creating jobs and advancing the state’s economy during an event Wednesday in the state's capitol.

Foundation President John R. McKernan Jr. met with Gov. Gary Herbert and business advocates on February 4 to tout the findings of a new report Utah: Collaboration as the Foundation for Growth that places Utah as a top performer in job creation, entrepreneurship and a variety of other metrics.

“We highlight Utah’s accomplishments not only to give credit where credit is due, but to hold up an example to other states that aren’t faring as well,” McKernan said during a press conference inside the Utah State Capitol building. “There are steps that states all across this nation can take to grow their economies and get a competitive edge.”

The new report on Utah is a supplement to the Enterprising States 2014 report, which compares all 50 states across a set of 33 metrics. In the study, Utah ranked 6th or better in all major categories, and has been the top performing state overall for two years running.

Utah business leaders on hand included Lane Beattie, the CEO of the Salt Lake City Chamber of Commerce, and Val Hale, Executive Director of the Utah Governor’s Office of Economic Development. They credited a low-regulation, low-tax environment for the success of Utah's economy, as well as a collaborative approach to solving problems.

Herbert said Utah has done well to diversify its economy to create more jobs in high-tech sectors, and invested in infrastructure even during the economic downturn.

Beattie, for his part, said the state has benefitted from having political and business leaders on the same page with major initiatives. The state’s C2+E2 (Collaboration and Coordination + Efficiency and Effectiveness=Success) framework has allowed for partnerships on everything from economic development projects to the setting of education standards.

“Everyone is working together,” he said.

In the Enterprising States 2014 report, Utah ranked 3rd overall in economic performance, 3rd in exports, 4th in technology and entrepreneurship, 6th in business climate, 4th in talent pipeline and 3rd in infrastructure.

Utah’s success has shown up most prevalently in its job creation. The state saw 22% overall job growth between 2001 and 2014, including a 20.9% boom in middle skills jobs.

Zions Bank and Intermountain Healthcare were chief sponsors of the report.

Read the full report, Utah: Collaboration as the Foundation for Growth.