The Growth Effect on Jobs 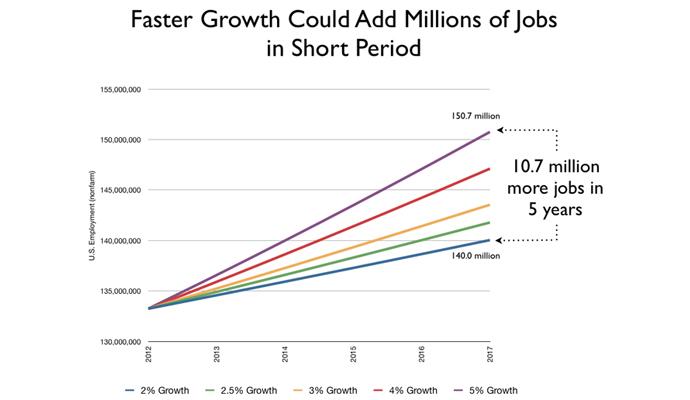 Is the persistently high unemployment rate a secular, rather than cyclical, occurrence? Is it, in other words, a basic shift in the labor market that will leave us with semi-permanently higher joblessness for years or decades to come -- no matter what we try to do about it?

Ed Lazear of Stanford and James Spletzer of the U.S. Census Bureau dug into the matter and presented their findings over the weekend at the Fed's Jackson Hole economic gathering. Lazear also summarized the research in The Wall Street Journal. "The unemployment rate has exceeded 8% for more than three years," wrote Lazear.

This has led some commentators and policy makers to speculate that there has been a fundamental change in the labor market. The view is that today's economy cannot support unemployment rates below 5%—like the levels that prevailed before the recession and in the late 1990s. Those in government may take some comfort in this view. It lowers expectations and provides a rationale for the dismal labor market.

Lazear and Spletzer looked at what happened in particular industries and specific jobs, asking whether the real problem is that some industries are too old and aren't coming back and whether there is substantial "mismatch" between job requirements and worker skills that prevent jobs from being filled. No doubt the economy is always changing, and few industries or jobs stay the same forever, but they found, for example,

that mismatch increased dramatically from 2007 to 2009. But just as rapidly, it decreased from 2009 to 2012. Like unemployment itself, industrial mismatch rises during recessions and falls as the economy recovers. The measure of mismatch that we use, which is an index of how far out of balance are supply and demand, is already back to 2005 levels.

Whatever mismatch exists today was also present when the labor market was booming. Turning construction workers into nurses might help a little, because some of the shortages in health and other industries are a long-run problem. But high unemployment today is not a result of the job openings being where the appropriately skilled workers are unavailable.

Lazear and Spletzer concluded that no, the jobless problem is not mostly secular, and we shouldn't accept high unemployment.

The reason for the high level of unemployment is the obvious one: Overall economic growth has been very slow. Since the recession formally ended in June 2009, the economy has grown at 2.2% per year, or 6.6% in total. An empirical rule of thumb is that each percentage point of growth contributes about one-half a percentage point to employment.

The economy has regained about four million jobs since bottoming out in early 2010, which is right around 3% of employment—just the gain that would be predicted from past experience. Things aren't great, but the failure is a result of weak economic growth, not of a labor market that is not in sync with the rest of the economy.

The evidence suggests that to reduce unemployment, all we need to do is grow the economy. Unfortunately, current policies aren't doing that. The problems in the economy are not structural and this is not a jobless recovery. A more accurate view is that it is not a recovery at all.

The upside of this dismal situation is that we can do something about it. Think about what a different set of pro-growth policies could mean for American workers. Using Lazear's very rough rule of "one point growth, half a point employment," we can get an idea of what faster growth might yield in the labor market.

At today's feeble 2% growth rate, we might expect to add several tens of thousands, or maybe a hundred thousand or two, of jobs each month. Over the next five years, at 2%, we might add something like seven million jobs. But that's barely enough to keep up with population growth. Three percent growth, the historic average, meanwhile, would likely yield around 10 million net new jobs, 3 million more than at today's 2% growth rate.

But three percent growth coming out of a deep recession and slow recovery is itself slower-than-usual recovery speed. It is certainly not an ambitious objective. Coming out of a slump like today's we should be able to grow at 4, 5, or 6% for several years, as we did in the mid-1980s. Four percent growth for the next five years could add 14 million net new jobs, and 5% growth could add 17.5 million -- meaning in 2017 something approaching 11 million more Americans would be working compared to today's sclerotic 2% growth. 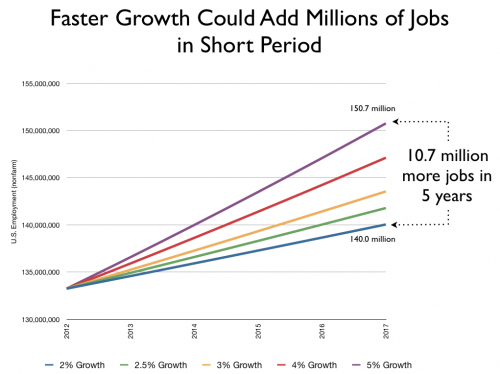 Keep in mind, these are rough rules of thumb, not forecasts or projections, and we're leaving out lots of technical dynamics. There's a lot going on in an economy, and we do not pretend these are precise estimates. The point is to show the magnitudes involved -- that faster growth can provide jobs for millions more Americans in a relatively short period of time.

The problem is that U.S. policy before and after the financial panic and recession has not supported growth -- I'd argue it has impeded growth. Faster growth is so important, we should be doing everything possible to enact policies that encourage it -- or, if we can't enact them today, then at least pointing the nation in the right direction.

A more efficient tax code that rewards rather than punishes investment and entrepreneurship would make a huge difference. Unfortunately, some in Washington and the states are proposing higher tax rates and new carve-outs and favors that will make real tax reform impossible. We need to ensure that Washington doesn't keep consuming an ever greater share of the economy. But again, we've just seen a huge jump in the government-economy ratio, from 20% to 25%, and the current budget path just makes this ratio worse and worse over time.

Does anyone believe we have a regulatory system that promotes economic growth? In each of the last two years, the Federal Register of government regulations has grown by more than 81,000 pages. We've recently seen Washington drape vast new blankets of regulation over finance and health care and interfere at every turn with our energy economy -- a sector that is poised to deliver explosive growth in coming years. Other regulatory actions, like FCC interference in broadband and mobile networks, can slow growth at the margins or, depending on how zealous regulators choose to be, severely disrupt an innovation ecosystem.

The economy is too complex to dial up exactly what we want. I am not suggesting a simple flip of a switch can achieve this dramatic improvement. But we should be giving ourselves -- and American citizens -- as many chances as possible. Given what's at stake, there's no excuse for not lining up policy to maximize the opportunities for faster growth. 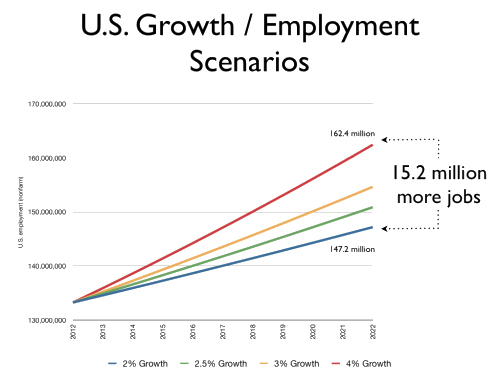 What Talent Are You Missing Out On?
Reshaping the Childcare Landscape
Untapped Potential: Economic Impact of Childcare Breakdowns on U.S. States