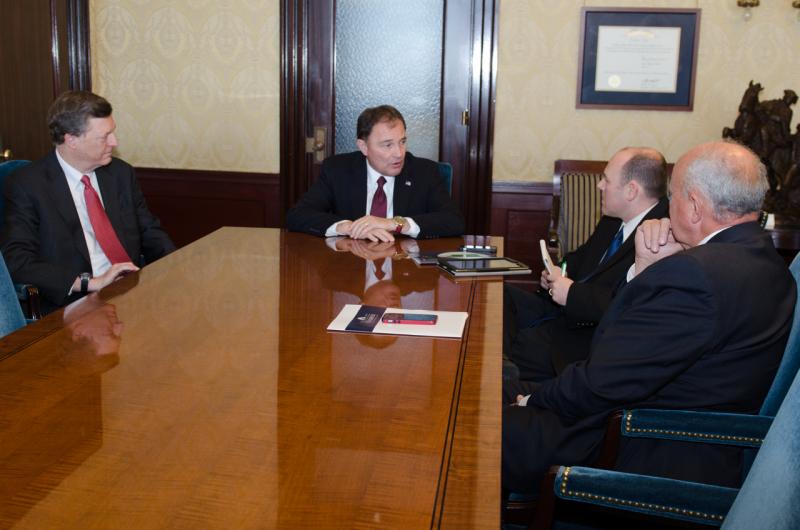 The U.S. Chamber of Commerce Foundation hosted a short roundtable discussion with business and political leaders in Utah to discuss the state's performance in the Enterprising States 2014 project. Utah has been the top performing state for two years running, based on rankings in 33 different metrics. The Chamber Foundation recently issued a supplementary report, Utah: Collaboration as the Foundation for Growth, which delves further into Utah's success.

Utah has finished in the top ten in the five major policy categories in our Enterprising States report for two straight years. Can you offer some idea of how hard that is to accomplish?

McKernan: “It’s is difficult to repeat in anything that you’re successful in. It takes effort and collaboration and cooperation.”

“They have this collaboration and alignment between the legislature, the governor’s office and the business community that allows them to stay on task.”

Governor, how would you describe the economy of Utah right now?

Herbert: I would say it’s healthy. It’s diversifying. And it’s growing. Our unemployment rate, which was at 8.7% is now at about 3.5%. We’re also seeing more technology-type jobs, and those pay more. There’s reason to be optimistic about the future. We have momentum and there’s no reason the country can’t be healthy many years into the future.

McKernan: Utah is skating to where the puck is going to be, and that’s going to serve them well going forward.  They don’t have to rest on their laurels. They can keep moving forward.

How has your continued investment in infrastructure paid off? I understand you invested in things like highways and light rail even during the economic downturn.

Herbert: The business community was very loud and clear and said ‘if you want us to succeed, business-wise, you better take care of the transportation.’ It’s not just a quality of life issue. They said ‘we can’t do business if we can’t get from point A to point B.’

We took that to heart. Today, we’re spending about $1 billion a year on transportation. We have to, because we’re now the 3rd or 4th fastest-growing state in America.

Water is also a big issue for us. Our infrastructure needs include water development, and anticipating the need for water we’ll have over the next 50 years.

Beattie: We built a $1.7 billion freeway without any federal money. We put in four new light rail lines and commuter rail line…and the people got to vote. Seventy-percent of the people in the most conservative county on earth voted in favor of doing that. And the business community ran that initiative. We started creating an environment where businesses wanted to come and learn and play right here in Utah.

The Enterprising States 2014 report talks a lot about collaboration between political and business leaders. Could you point to some specific examples of how it’s worked well for Utah in terms of job creation?

Beattie:  I would use Goldman Sachs as a great example. They came into my office about five or six years ago and said, “we’re going to grow.” I said, “really? I didn’t even know you were in Utah.”

They said they might be able to grow to more than 500 people, and five years later they have more than 2,000 people and are the second largest Goldman Sachs office. We are the number one requested relocation spot for Goldman Sachs worldwide.

Herbert: Oracle is another one. They came here about ten years ago and were a little apprehensive. Now they say Utah is the number one most requested transfer.

With unemployment so low, you must now have an issue finding qualified workers for some jobs? How has this impacted your goals for education?

Beattie: We got everyone together and said ‘what are we going to do?’ We have a goal of 66% of the population having a degree or certificate by 2020. We want to be in the top 10 percent of the nation in reading proficiency by third graders.

Herbert: We’re coming up with a ten-year plan, so we’re not re-inventing the wheel. This helps unite our voices so we’re pulling together.

So, ultimately, what can other states learn from Utah?

McKernan: Other states need to look at regulations, at taxes and how to respond to the needs of the business community. Too few states get the kind of collaboration that Utah has. If you listen to the Governor and Lane, they talk about consistency and long-term planning. Other states can’t reach agreements because the key players aren’t in line. The secret sauce here is that everybody works together and has a plan in place.