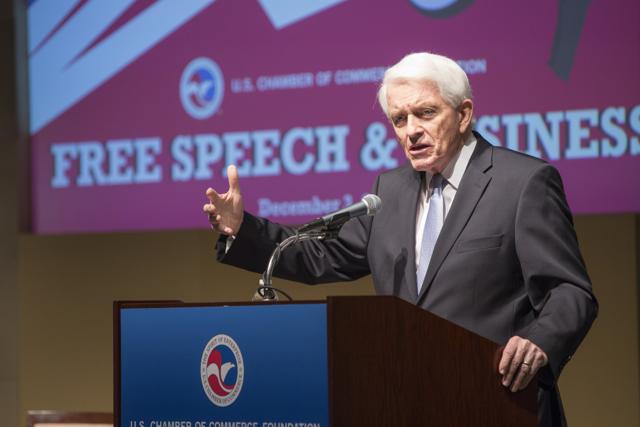 In 2014, free speech has been under attack, especially when the business community has gotten involved in public policy debates.

Senator Harry Reid (D-NV) often took to the Senate floor to obsessively demonize Americans who exercise their free speech rights. Then in September, 42 Senators voted to amend the Bill of Rights to prohibit election spendingby businesses. Thankfully the measure failed.

In a speech at a U.S. Chamber of Commerce Foundation event on Free Speech & Business, U.S. Chamber President and CEO Tom Donohue called out those who want re-write the First Amendment:

The attacks on free speech in this country have been growing steadily in recent years across many institutions, but it’s business free speech that has been the number one target for legislators, regulators, and activists.

Some politicians and business opponents have determined that if they can’t beat us on the merits in the public square, they’ll simply work to silence our voice. To cut us out of the debate altogether so they can have a one-sided conversation with the American people.

Besides attempts to limit political speech, there have been calls for businesses to disclose their political spending:

In 2010, some in Congress tried to sway the midterm elections in their favor through the DISCLOSE Act, legislation that would have chilled political participation by the business community—but not by labor unions.

This bill was also defeated. But business opponents still want to see its principles enacted, and some lawmakers haven’t given up on enacting similar legislation.

A group of labor unions, shareholder activists, and anti-business policymakers have asked the Securities and Exchange Commission to make a rule that would compel public companies to disclose their spending on independent political speech.

However, these efforts are disingenuous:

The idea here is to bring these companies’ political spending—which is free speech—out into the open so they can be targeted for harassment and boycotts.

They say it’s about transparency, but that’s a laugh. Their ultimate goal is a ban on all corporate political and lobbying spending and at a time when Washington is more deeply involved in regulating business than at any time in history.

A report from the Center for Competitive Politics explains the organized campaign to silence businesses from taking part in public policy debates.

Instead of silencing people and groups, let’s have more speech, not less, Donohue argued:

We need more debate on the big questions facing our government, our economy, and our society—not less. We need less political correctness and more points of views in the public dialogue.

The freedom to speak is critical to America’s free enterprise economy:

You can’t have successful free enterprise without the free flow of information, the ability to test ideas in the market, and to share thoughts with others, even unorthodox ones. You can’t have prosperity without competition and the best ideas, products, and services winning out—that’s what drives growth and a higher standard of living. You can’t have sound and effective economic policies when businesses can’t speak freely to elected officials, regulators, shareholders, customers, and other businesses.

“We’re going to fight for everyone’s right to speak and even to voice controversial opinions without being tarred and feathered in the public square,” Donohue concluded.