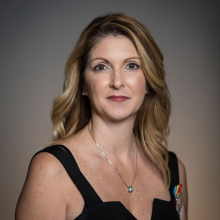 Barbara Poma, founder and owner of Pulse Nightclub, was raised in Coral Springs, Florida where she attended J.P. Taravella High School. She graduated in 1990 from the University of Central Florida with a BA in English Literature and a minor in Secondary Education and she was member of the Pi Beta Phi Sorority.

In 1995 she married entrepreneur Rosario Poma, with whom she has two children and a stepdaughter. Joining her restauranteur husband, Ms. Poma has built and operated several businesses, most significantly Pulse Nightclub which was established in 2004 as a tribute to her brother John who passed away from HIV/AIDS.

Pulse Nightclub was embraced by the global LGBTQ+ community for the club's culture of love and providing a venue where gays, lesbians and their families could be themselves. In the course of operating Pulse Nightclub, Ms. Poma has become a respected human and civil rights advocate.

On Sunday, June 12, 2016 Pulse Nightclub became the scene of one of the nation's worst mass shooting in modern American history. As club owner, Ms. Poma, like the rest of the world, was rocked into a new and unimaginable reality that carried immeasurable loss and hardship. Since the loss of her business, she has shifted her focus on preserving the memory of the 49 taken and providing support and hope to the 68 survivors.

Poma now serves as CEO & Executive Director of onePULSE Foundation. which has been established to create a permanent national memorial & museum to honor those who perished, the survivors and all affected.

She has been named one of NBC Universal's 2018 Change Makers, received the 2018 Point Foundation Leadership award, recognized as Ally Ambassador of the year for the 2018 LGBT —Allies Diversity Summit and 2017 LGBT Champion of Equality at the Harvey Milk Diversity Awards.