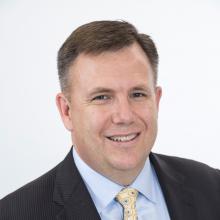 Marc DeCourcey is senior vice president of the U.S. Chamber of Commerce Foundation and leads its Corporate Citizenship Center (CCC), which serves as a leading resource for businesses dedicated to making a difference. The Center works with businesses to tackle the toughest issues affecting society in the areas of community improvement, disaster resilience, economic empowerment, education, environment, and health.

DeCourcey has 30 years of experience in public policy leadership, spanning the executive and congressional branches of the U.S. government as well as the nonprofit sector. Previously, DeCourcey held several senior positions at the American Red Cross (ARC)—including chief of staff in the president and CEO’s office. There he implemented strategic initiatives, directed day-to-day operations, and represented the organization to major stakeholders across government, corporate, and nonprofit sectors.

He also served as vice president for strategic partnerships and was ARC’s senior director of federal government relations and partnerships, serving as the liaison to the White House, Cabinet departments, and other federal agencies. Earlier, DeCourcey was chief of staff in the Office of Legislation and Congressional Affairs at the U.S. Department of Education.

A native of Massachusetts, DeCourcey ran for state representative immediately after graduating from Providence College. After narrowly losing the race, he was hired to work in Gov. Bill Weld’s (R-MA) administration. He then managed successful congressional campaigns and worked on Capitol Hill for former Reps. Peter Blute (R-MA) and John Kasich (R-OH). In addition, he served as executive director of the Massachusetts Republican Party.

DeCourcey has a long history of community service and has been active on numerous civic and philanthropic boards. He was appointed to be a U.S. National Commissioner for UNESCO and named to the U.S. Department of State’s Advisory Committee on the Strategic Dialogue with Civil Society. He serves as a guest lecturer at the Institute for Corporate Social Responsibility at Johns Hopkins University. He’s also been named No. 50 in Ethisphere’s 100 Most Ethical People in Business. He and his wife have three children.