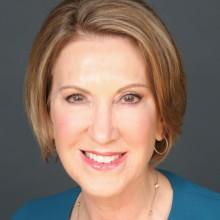 Carly is a true leader and a seasoned problem‐solver. She is a passionate, articulate advocate for policies that advance economic growth, entrepreneurship, innovation, and effective leadership. Through extensive experience she has learned that human potential is a limitless and uniquely powerful resource that can be unlocked, inspired and focused on worthy goals and common purpose. Carly believes that leaders are made not born and that everyone has far more potential that they realize.

Carly started out as a secretary for a small real-estate business and eventually rose to become the first woman ever to lead a Fortune 50 company. After starting as a secretary, she joined AT&T in an entry-level sales position. She rose through the ranks becoming the first female officer at AT&T and fifteen years later she led AT&T’s spin-out of Lucent Technologies. Lucent was the largest technology IPO ever, up to that point, after its IPO she lead their $23 billion North American operations.

In 1999, Carly was recruited to HP to save a struggling company that had become a bloated, inept bureaucracy that had failed to meet expectations for 9 consecutive quarters. During the worst technology recession in 25 years, she re-focused the company on innovation and market leadership again. Under Carly’s leadership, revenues grew, innovation tripled, growth quadrupled, and HP grew to become the 11th largest US Company. While lots of other tech companies went out of business altogether, Carly saved 80,000 jobs and would grow the company to 160,000 jobs.

During her tenure at HP the company received numerous civic recognitions such as being named one of the 100 Best Corporate Citizens by Business Ethics Magazine, as one of the “100 Best Companies for Working Mothers,” by Working Mother Magazine, receiving a one-hundred percent rating by The Human Rights Campaign Foundation’s Corporate Equality Index, and was named one of “The World’s Most Respected Companies” by The Financial Times and PricewaterhouseCooper.

After leaving HP Carly focused her efforts on giving back. She served as the Chairman of Good360, the world’s largest product philanthropy organization, as Chairman of Opportunity International, a Christian-based organization that lifts millions out of poverty around the globe through micro-finance, and founded the One Woman Initiative, in partnership with Secretary of State Condoleezza Rice, to engage and empower women in Pakistan, Egypt, India and the Philippines with information, training, technology and micro-lending.

Her service has extended to Government; as chairman of the external advisory board of the CIA, the Defense Business Board, the Advisory Group on Transformational Diplomacy for the State Department, and as a member of the U.S. Space Commission. Additionally, Carly has served on the board of visitors at James Madison University, the board of trustees of MIT, and on the boards of companies such as Kellogg, Taiwan Semiconductor Manufacturing Co., Merck, Cisco and Zurich International.

In 2015, Carly launched a campaign for President. Running as a political outsider, Carly spoke about empowering and engaging citizens to take back Government from a political ruling class that has failed to deliver results. Launching from a standing start the campaign grew to a leadership and grassroots network that spanned the country, and outperformed numerous career politicians.