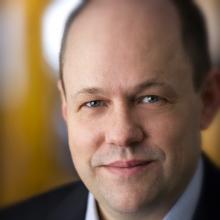 Clay Johnson is the chief information officer for GE Power & Water. He is responsible for leading all IT initiatives and strategies for the business, as well as working closely with the digital and software & analytics teams to align efforts.

Before joining GE in July 2014, Clay held the position of vice president of information technology for The Boeing Company. At Boeing, Clay had end-to-end responsibility across the company for corporate systems, supply chain systems, services, and data warehouse and business intelligence and served as the business partner for these functions.

Prior to joining Boeing, Clay was director of information technology at Dell where he led a global team that was responsible for the company’s manufacturing IT systems. Prior to that, he worked as a software developer at FedEx, where he implemented various software systems, including a company-wide logistical routing system that was deployed to facilities in North America.

Clay also served five years in the United States Coast Guard, where he held numerous leadership positions. Clay holds a bachelor's degree in computer science engineering and an M.B.A. from the University of Texas.