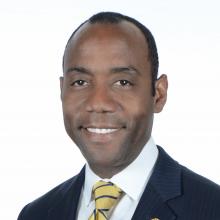 Center for Education and Workforce
President and CEO, NAACP

Cornell William Brooks is the president and CEO of the National Association for the Advancement of Colored People (NAACP), the nation’s oldest, largest, and most widely respected grassroots-based civil rights organization.  In 2014, he became the 18th person to serve as chief executive of the Association, whose members in the United States and worldwide are the premier advocates for civil rights in their communities.

A graduate of Head Start and Yale Law School, Brooks considers himself “a grandson, heir and a beneficiary” of the landmark decision Brown v. Board of Education argued by legendary NAACP litigator Thurgood Marshall.  As a civil rights attorney, social justice advocate, fourth generation ordained minister and coalition-builder, Brooks’ life and experience exemplify the NAACP’s mission to secure political, educational, social, and economic equality for all citizens.  As the CEO, he is working with Association leadership and membership to build an NAACP that is multi-racial, multi-ethnic, multi-generational, and one million members strong.

Prior to joining the NAACP, Brooks led the Newark-based New Jersey Institute for Social Justice as president and CEO.  There, he directed the Institute’s successful efforts to win the passage of three landmark prisoner reentry bills in 2010, hailed by The New York Times as, “a model for the rest of the nation.”  The historic legislation created a more level playing field for individuals returning home following incarceration, and enabled formerly incarcerated men and women to rebuild their lives as productive and responsible citizens.  Additionally, Brooks successfully led the passage of a precedent-setting “Ban the Box” statute, as well as laws combating foreclosures during the housing crisis.  As part of the Institute’s Equal Justice/Legal Initiative, Brooks oversaw the Institute’s juvenile justice reform work, including successful efforts to reduce juvenile detention rates in New Jersey to historic lows and founding the state’s first community court.

Under Brooks’ leadership the Institute developed workforce development and training programs that delivered education and professional training to over 700 low-income, hard-to-employ residents, and placed more than 500 program graduates in higher-wage jobs.  His efforts transformed workforce development initiatives into more market-sensitive and community-responsive interventions by linking the Institute’s training programs to high-demand sectors and employers.

In 2010, New Jersey Governor Chris Christie selected Brooks to serve on his transition team on the Committee on Homeland Security and Corrections.  While in New Jersey, Brooks served as Second Vice-Chair of the East Orange General Hospital Board of Trustees, Vice-Chair of the New Jersey Public Broadcasting Authority, and on the National Governing Board of Common Cause.

Brooks previously was Senior Counsel with the Federal Communications Commission (FCC), working on legal and policy matters promoting small business and media ownership diversity, and directing the FCC’s Office of Communication Business Opportunities.  Serving in this capacity, he led efforts to increase financing available to small, minority- and woman-owned businesses through regulatory and industry initiatives.  Earlier as a U.S. Department of Justice trial attorney, Brooks secured the then largest government settlement for victims of housing discrimination based on testing, and filed the government’s first lawsuit against a nursing home alleging housing discrimination based on race.

His civil rights experience includes serving as Executive Director of the Fair Housing Council of Greater Washington and as trial attorney with the Lawyers’ Committee for Civil Rights Under Law.  As the Executive Director of the Fair Housing Council, Brooks oversaw a regional program of fair housing testing and public education in Washington, DC, Northern Virginia, and metropolitan Maryland that served as the basis of impact litigation.

Inspired by his grandfather’s 1946 example, Brooks ran as the Democratic Nominee for U.S. Congress for the 10th District of Virginia in 1998, advocating for public education, affordable healthcare and fiscal responsibility.

He earned a Bachelor of Arts, with honors, in political science from Jackson State University and a Master of Divinity from Boston University School of Theology, with a concentration in social ethics and systematic theology.  After seminary, Brooks earned a Juris Doctorate from Yale Law School, where he served as a Senior Editor of the Yale Law Journal and Member of the Yale Law and Policy Review.  He served a judicial clerkship with then Chief Judge Sam J. Ervin, III, on the U.S. Court of Appeals for the Fourth Circuit.  While studying at Boston University as a Martin Luther King Scholar, Brooks was awarded both the Oxnam-Leibman Fellowship for outstanding scholarship and promoting racial harmony, and the Jefferson Fellowship for outstanding scholarship and excellence in preaching.

As an attorney, activist, congressional candidate, and pastor, Brooks has spoken before congregations of diverse faiths, as well as the United Nations Sub-Committee on Discrimination, business organizations, bar associations, labor unions, civil rights groups, schools, and colleges in the U.S. and Europe.  As a columnist, he has written for several newspapers on contemporary politics, ethics, and faith.

Brooks, his wife Janice Broome Brooks, and their sons Cornell, II and Hamilton, are members of Turner Memorial A.M.E. Church in Hyattsville, MD.