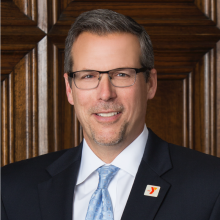 President and CEO, The YMCA of Metropolitan Dallas

Curt began his YMCA career in 1983 as a Day Camp Counselor at the YMCA of Metropolitan Dallas.  He served in a variety of positions at that Y, rising to Vice President of Operations before leaving to join the YMCA of Northwest North Carolina in March 2003 as Senior Vice President and Chief Operating Officer.

Curt was named interim President and Chief Executive Officer of the YMCA of Northwest North Carolina in July 2007 and after a nationwide search, he accepted the position in January 2008.

In January 2017, Curt was named the President and Chief Executive Officer of the YMCA of Metropolitan Dallas.

In addition to his role in Dallas, Curt is active on the state, regional and national levels with the Y, serving on the Executive Committee of the Texas State Alliance of YMCAs and currently serves as Vice Chair for YNAN (YMCA North American Network that encompasses the largest Ys in North America). He served on the North American YMCA Development Organization or NAYDO from 2008-2018 and as a member of the YMCA of the USA Board of Directors from 2013-2017.

Curt is married to Melody and they have two daughters, Maddie and Caroline.  Curt spends his free time with his family, is active in his church, and enjoys honing his woodworking skills and exercising.

November 14 (All day) to November 15 (All day)
This form needs Javascript to display, which your browser doesn't support. Sign up here instead