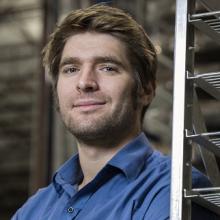 Eben Bayer is the CEO and Co-Founder of Ecovative Design, a leading biomaterials company growing high performance, premium, award-winning products that are safe, healthy, and certified sustainable. Ecovative uses biology to upgrade existing products and processes solving important problems in major industries. Bayer, who grew up working on his family’s farm in Vermont, is a pioneer in leveraging mycelium—"nature's glue”—in Mushroom® Materials to drive sustainable innovation in the industrial sector.

Sparked by a successful college class project, Bayer teamed with then-classmate Gavin McIntyre to start Ecovative in 2007. In a quest to replace polystyrene, they created compostable MycoFoam ™, now used as packaging by Dell and other  Fortune 500 customers. In a quest for a solution to the dangers of formaldehyde in engineered wood, they created formaldehyde and toxin-free MycoBoard™, now used in office furniture, acoustic wall tiles, and other commercial products.

The transformative power of Bayer’s vision for mushroom’s mycelium and bio-inspired design is evidenced by these products and partnerships Ecovative has built with Fortune 500 and other companies. Ecovative continues to develop its materials platform.

Ecovative has been recognized globally including: as a Tech Pioneer by the World Economic Forum; for its potential impact on climate change by the Postcode Lottery Green Challenge; by the EPA with its Environmental Quality Award; by the US Small Business Administration with its Tibbetts Award for excellence in Small Business Innovation Research (SBIR); as a recipient of the Buckminster Fuller Challenge for socially responsible design; by the Ellen MacArthur Foundation; and by the Cradle to Cradle Innovation Institute.

Based on his vision and inventions, Bayer has evangelized a strategy of bio-adaptation, encouraging the use of biology to grow materials with exceptional, sustainable properties unattainable through conventional chemistry. He has carried this message around the world, including presentations at TED Global (London), the World Economic Forum (Davos, Switzerland) and Forbes 30 Under 30 (US).

Bayer is also interested in augmentative neuro-systems, thermodynamics, education, and monetary systems modeled around life. He serves on the external advisory board of the Arizona State University (ASU) Origins project, and advises start-ups in and around New York.

Bayer earned dual undergraduate degrees in Mechanical Engineering and Innovation & Design, from Rensselaer Polytechnic Institute in 2007. For the 18 years prior, he studied agriculture and farming through hands on learning.