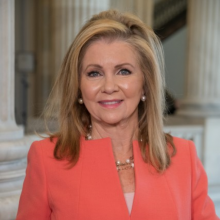 Marsha Blackburn was elected by the people of Tennessee to the United States Senate in 2018.  Before her election, Blackburn represented the Volunteer State's Seventh Congressional District in the U.S. House of Representatives for eight terms, and in the Tennessee State Senate for two terms. She is the first female U.S. Senator in her state's history and was the first woman elected in her own right to the U.S. House from Tennessee.  Senator Blackburn dedicates her public service to fighting for faith, family, freedom, hope and opportunity - what she calls "The Big Five."  She serves on the Senate Armed Services, Veterans Affairs, Judiciary, and Commerce, Science, and Transportation Committees.