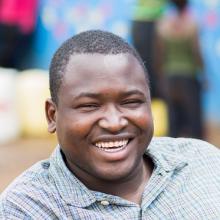 Kennedy Odede one of Africa’s best-known community organizers and social entrepreneurs, and is the Founder and CEO of Shining Hope for Communities (SHOFCO).

Raised in Kibera, the largest urban slum in Africa, Kennedy experienced the devastating realities of life in extreme poverty, and dreamed about making a difference in his community. While working at a factory in 2004, Kennedy saved 20 cents, purchased a soccer ball, and started the SHOFCO movement. Motivated by the entrepreneurial spirits of the people of Kibera, Kennedy led SHOFCO to become the largest grassroots organization in the slum.

Today, SHOFCO combats gender inequality and extreme poverty in urban slums by linking tuition free schools for girls to holistic social services for all. By connecting community services with a school for girls, SHOFCO shows that girls and their education are part of an ecosystem of value, and it allows the school to become a portal for large-scale social change.

Through Kennedy’s innovative vision, this model enables both genders to be part of the solution and builds a community invested in its own future—ultimately, transforming the face of urban poverty. Kennedy has established SHOFCO in both the Kibera and Mathare slums of Nairobi, and will continue to facilitate the spread of this model to other urban slums.

Kennedy received a full-scholarship to Wesleyan University, becoming one of Kibera’s first to receive an education from an American liberal arts institution. He graduated in 2012 as the Commencement Speaker and with honors in Sociology, and now serves as a member of Wesleyan’s Board of Trustees.

In 2010, Kennedy was awarded the Echoing Green Fellowship, which is given to the world’s top emerging social entrepreneurs. He also won the 2010 Dell Social Innovation Competition, wrote two Op-Eds that appeared in the New York Times, was named one of Forbes’ 2014 30 Under 30: Social Entrepreneurs, and received the 2014 Mohammed Ali Humanitarian award for Dedication. Kennedy won the Rookie of the Year award at the 2014 Transform Kenya Awards and was the People’s Choice Award Winner for Social Entrepreneur at the 2014 Africa Awards for Entrepreneurship.

Kennedy’s work with SHOFCO has been featured in two PBS documentaries, Half the Sky and A Path Appears, and also by Chelsea Clinton and Maria Menounos on NBC, by President Bill Clinton, and on multiple occasions by Nicholas Kristof in The New York Times.

Kennedy speaks six languages, is a senior fellow with Humanity in Action and an Aspen Institute New Voices Fellow. He is also a member of the Clinton Global Initiative. He splits his time between Nairobi and New York City.