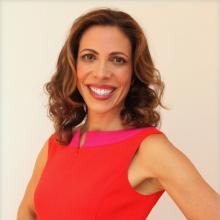 Named one of “America’s Best Leaders” by U.S. News and one of TIME’s 100 “Innovators for the 21st century,” New York Times bestselling Linda Rottenberg is considered one of the world’s most dynamic experts on entrepreneurship, innovation, emerging markets, and leadership. A frequent lecturer at Fortune 500 companies, Rottenberg has been the subject of four case studies by Harvard Business School and the Stanford Graduate School of Business. Dell featured her in its “Take Your Own Path” advertising campaign; Veuve Clicquot named her Businesswoman of the Year; Good Morning America and NPR called her the “entrepreneur whisperer” and Tom Friedman dubbed her the world’s “mentor capitalist” in The World Is Flat.

Ms. Rottenberg is the CEO and co-founder of Endeavor, the first organization focusing on the “scale-up” not “start-up” phase of entrepreneurship, which people are now recognizing is the key to job creation. Headquartered in New York with 20 affiliates around the world, Endeavor selects, mentors, and coinvests in business innovators demonstrating the greatest potential to go big. Since 1997, Endeavor has screened 40,000 candidates and handpicked 1,000 entrepreneurs who’ve created 400,000 jobs and generate over $7 billion annually.

A graduate of Harvard University and Yale Law School, Rottenberg is a member of YPO, the Council on Foreign Relations, and the World Economic Forum. She also serves on the board of Zayo Group, a global provider of bandwidth infrastructure that is listed on the NYSE, and serves on the advisory council of Abraaj Capital, an $8 billion global private equity firm. Rottenberg has been profiled in the Wall Street Journal, Forbes, USA Today, The Economist, Strategy + Business, People, MORE, Glamour, and the Financial Times, and has appeared on The Today Show, Good Morning America, NPR, MSNBC, CNBC, CNN, Fox Business News, Fox News, and Bloomberg TV. In 2011, Business Insider dubbed her “Ms. Davos.”

A native of Newton, MA, Rottenberg lives in Brooklyn with her husband, bestselling author and New York Times columnist Bruce Feiler, and their identical twin daughters, Tybee and Eden.