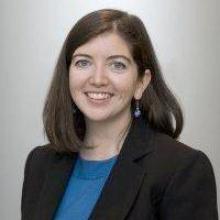 Prior to joining WEConnect International, Liz worked for nine years at the Women Presidents’ Educational Organization, most recently as the Executive Director of the Washington DC region, where she directed the WBENC certification operations for women business owners and provided training for women business owners to access corporate supply chains. Liz’s educational background is in gender issues and economic development. She received an award from the Small Business Administration as the Women’s Business Champion of the year for the DC Metro region in 2009.  She has also received a Salute award from WBENC in 2008.  She received her bachelor’s degree from Dartmouth College and her master’s in international affairs from Columbia’ School of International and Public Affairs.

Liz participated in the 4th Annual Mentoring and Networking Reception in 2014 hosted by the CWB. She was also a speaker at the 3rd Annual CWB Summit.