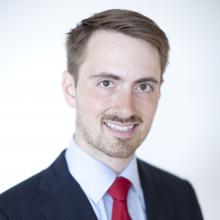 Matt Jensen is a research associate at the American Enterprise Institute (AEI), where his research agenda is focused on debt, taxation, and innovation. Jensen also coordinates AEI’s International Tax Database. He served a short tenure in the finance industry before turning to policy and economics.

At AEI, Jensen has recently studied the effect of federal debt accumulation on households in different income groups; strategies to promote growth using business tax reform; and how the methods used for tax policy analysis affect tax policy outcomes. He is currently investigating the way in which firm and industry characteristics affect innovative output.

Jensen is also a founder of Wagonchain.com, a startup devoted to facilitating efficient supply chains for domestically-manufactured goods.

Jensen publishes widely in the press, including the Wall Street Journal, U.S. News and World Report, Tax Notes, and many other publications. Most recently, his commentary on tax policy during the 2012 election was referenced in the Washington Post, Bloomberg, National Review, the Wall Street Journal, and the 2012 presidential debates. He was also interviewed by PBS, Fox News, and many other media outlets on the subject. He lives in Washington, D.C.

08/01/13
Which Industries are Most Likely in your Supply Chain?
Matthew H. Jensen