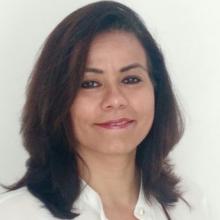 Meenu Handa has over twenty six years of a wide and varied experience in corporate communications. She has worked on a diverse set of issues across industries and played the role of a trusted advisor, business leader and an industry thought leader. She has led communications for companies like Google, Amazon and Microsoft and provided advisory services to companies including Boeing, Swatch Group, HCL, Citibank, STAR TV, Hindustan Construction Company, Allied Domecq, and Nokia among others as well as several trade bodies like ISTMA, MAIT and TPAI. Her areas of specialization include, corporate strategy, public affairs, media strategy, corporate social responsibility, internal communications, crisis communications and marketing communications. An industry thought leader she regularly speaks at both domestic and international fora on issues of crisis communications, measurement and diversity.

She is an Independent Director on the Board of Directors for SRL Diagnostics.

In Sept 2016, The Holmes Report, a global communication industry fora recognized her with the SABRE Asia Pacific, Individual achievement award, for her role and contributions to the recognition of the corporate communications function. In 2013, she was conferred the Corporate Affairs Leadership Award by the World CSR Congress. The forum recognizes individuals who have helped raise India’s governance & disclosure standards and positively impacted the environment, society and their business. In 2012, she was recognized as the Corporate Communications professional of the year by exchange4media, a platform focused on the communications industry in India.

She is currently the Director of Corporate Communications for Google in India. Her responsibilities include developing and managing external communications strategy.

Prior to Google, Handa set up the corporate communications function for Amazon in India. She was spearheading their external and internal communications strategy as well as put in place their CSR strategy and framework. In a short period of time Amazon was recognized in India by several industry fora for the innovation and rapid growth. The CSR program was recognized with the Golden Peacock award for 2015.

In the seven and a half years that she was at Microsoft India prior to Amazon, the company was conferred the title of ‘Most Respected MNC’ and the ‘Most Admired Company’ several times and recognized by various annual surveys as the employer of choice. For her many contributions at Microsoft, Handa was recognised as the winner of the ‘Area Chairman's award for excellence’ in 2010.

Prior to Microsoft, as a consultant at and as Vice President of IPAN, (a WPP and one of India’s leading PR agencies), Handa successfully created communication strategies aimed at ministries to assert changes in policy and tax issues for clients like HLL, ISTMA, MAIT, TPAI and devised pre emptive crisis and issue management strategies for clients like, Dr Reddy’s, HLL and Amway. She has developed and implemented advocacy programs for social marketing organizations like Population Services International (PSI), Commercial Marketing Strategies (CMS), International Water Management Institute (IWMI), Public Affairs Center (PAC) and CRY. She has played a key role in establishing, and turning around several brands in India including Swatch Group, MTV, Star TV and Jim Beam brands.

Handa regularly conducts communication workshops for business leaders and has been a Guest Lecturer at the Delhi School of Communications.

Additionally, Handa is a national level Basketball player and has represented India in the Women’s Asian Basketball Championship held in Kuala Lumpur ’86. A licensed scuba diver, her hobbies include adventure sports, pottery, reading and traveling.