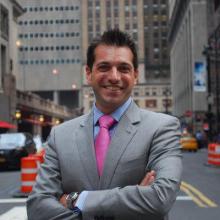 As Chief Public Strategy Officer for Rubicon Global, Michael leads the company’s rapidly-growing RUBICONSmartCity SaaS business, while overseeing all public policy, corporate communications, and sustainability operations company-wide. He and his team are relentlessly focused on driving value and differentiating Rubicon in the marketplace, the media and the investment community.

Prior to joining Rubicon in 2016, Michael oversaw public policy for Uber Technologies Inc. in the company’s largest global market, New York City, leading successful campaigns to allow the company to continue to grow and innovate in the face of multiple regulatory obstacles. He has also served as a senior advisor to The Climate Group, where he advised the Rt. Honorable Tony Blair; organized the historic C40 Large Cities Climate Summit in May 2007, and led public policy for the Manhattan Institute for Policy Research, a national think tank focused on solving urban issues with free market solutions. Michael was Political and Public Policy Analyst for UBS (NYSE: UBS), one of the world’s largest banks and has also worked on numerous high-profile campaigns, including his own U.S. Congressional run in 2010.

Michael holds a Bachelor of Arts in History from Boston College and a Master’s degree in Public Policy from Harvard University. He is currently U.S. Chair of the British American Project, a transatlantic fellowship focused on strengthening the “special relationship” between the United States and the United Kingdom, is a Board Member of the New York State League of Conservation Voters, and is a member of the Citizen’s Advisory Committee to the Hudson River Park Trust.