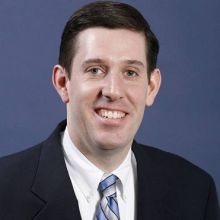 President of Business Operations, Chicago Wolves Hockey
Mike Gordon is in his seventh season as the Wolves president of business operations after joining the organization as vice president of partnerships in February 2009.
The 2015-16 season marked the fifth time in six years the Wolves increased their revenue and the team perennially ranks among the top AHL franchises in sponsorships and ticket sales.
During Gordon’s tenure, the front office won the 2010 President’s Award given annually to one American Hockey League organization to reward excellence in all areas off the ice. The Wolves won Sponsorship Sales Department of the Year awards in 2010, 2011, 2012 and 2015 and were recognized for excellence in community service in 2012 and fan experience in 2013.
Gordon received the James C. Hendy Memorial Award, which honors the executive who has made the most outstanding contribution to the AHL, following the 2012-13 season. He currently serves as the head of the league’s sales and marketing committee.
Prior to joining the Wolves, Gordon served as the vice president of sales for the Arena Football League’s Chicago Rush and oversaw all of the team’s corporate sponsorship initiatives. Under Gordon’s direction, the Rush ranked among the AFL’s top three teams in corporate sponsorship revenue for five consecutive years (2004-08). In addition to his sponsorship duties, he oversaw ticket sales during his first three seasons with the Rush. Attendance increased 56 percent during that time and the franchise drew its first sellout crowd. During his tenure, the Rush won the AFL Commissioner’s award for Organization of the Year three times.
The 47-year-old Gordon also spent seven years in the athletic department at DePaul University. He concluded his run at the Lincoln Park school as Assistant Athletic Director for External Relations, where he oversaw the licensing, marketing, ticket sales, and sponsorships for the athletic department. In addition to his departmental duties, he taught undergraduate classes in sports marketing.
A graduate of Knox College in Galesburg, Ill., Gordon received his MBA in Marketing at DePaul. He also performed consulting work for the Chicago Blackhawks, the 1994 World Cup, and several minor league baseball teams.
Gordon and his wife, Susan, have a daughter, Katie, and a son, Alex, and live in Arlington Heights, where he coaches various youth sports. He serves as President of the Arlington Heights Park District Foundation and sits on the DePaul University Marketing Advisory Board.