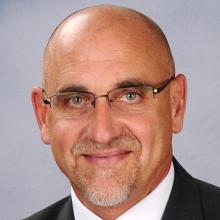 Superintendent, Oklahoma City Public Schools
Rob began serving as Oklahoma City Public School Superintendent in July 2014. He is the chief
instructional and operational officer of a highly diverse district of 46,000 students, 89 schools
and more than 5,000 dedicated staff members.
Prior to his present position he served as Superintendent of Schools in Federal Way, Washington,
a multi-cultural district of 23,000 students. He successfully led bold education reform initiatives
in equity, policy development, standards-based education and global learning. Federal Way’s
Academic Acceleration policy closed the opportunity gap in advanced placement student
enrollment and was passed into law by the Washington State legislature in 2013.
A Michigan native, Rob served as a coach, teacher and later Superintendent of the Waterford
School District in Michigan and in 2000, Rob was named the Associated Press Michigan Boys
Basketball Coach of the Year.
Rob has served on the Superintendents Council of the College Board, and the Governing Board
of the Minority Student Achievement Network (MSAN) out of the University of WisconsinMadison.
He is a consulting member of the Education Research Development Institute and was
president-elect of the Michigan Coaches Basketball Association.
Rob holds a Bachelor of Science Degree in Business Education from Eastern Michigan
University, a Masters Degree in Secondary School Administration from Central Michigan
University, and an Education Specialist Degree from Oakland University in Rochester,
Michigan.
Rob is married to his wife of 24 years, Kelly, and they have six children ranging in age from 9 to
18 years old.