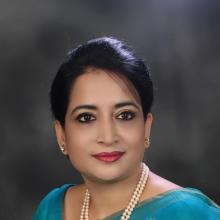 Ahmad feels that with the achievements in women empowerment the developing economies will hugely benefit. The contribution of women entrepreneurs will help to achieving MDG goals and the impact will assist in alleviating poverty.

She has been working for the private sector development for last 28 years and helped to promote the development of more than 7,000 women entrepreneurs by planning, designing and facilitating different programs. She supports these initiatives by providing training, business counseling, credit linkages, acting as guarantor, and lobbying government and policy makers on behalf of women entrepreneurs across Bangladesh. She developed 600 grassroots women through training and access to information to ensure their active and increased participation in socio-economic and civil life and to broaden the opportunity of women’s social network. Despite her many accolades, Ahmad’s proudest achievements are the changes that are visible in the lives of the members due to the support of BWCCI.

She organized the 1st Women’s National Business Agenda (WNBA), 2009 and successfully steered all stakeholders to make the WNBA declaration. Her dynamic advocacy for access to credit for women entrepreneurs has created a separate allocation of 100 crore taka in the national budget as well as a separate allocation of fund by the central bank with low rate of interest and without collateral for women entrepreneurs in Bangladesh.

Ahmad is an activist who promotes democracy, gender equality, anticorruption and women entrepreneurship. Her work is recognized not only in Bangladesh but also in the global arena. She has been invited as a speaker in many national and international seminars. She also joined several business delegations led by the Government at different times to many countries.

Ahmad, Vice Chairperson of the Nitol-Niloy Group is the quintessential successful woman. The Nitol-Niloy Group has a strong, diversified profile, which includes a joint venture with TATA Motors of India to trade, assemble, and provide after sales support of vehicles, transport and aviation services, financial institutions, manufacturing of sugar, cement, paper and luggage, real estate development, and sports promotion. She is the Key person of the Bangladesh chapter of Women Democracy Network. She is also a director of board of Sonali Bank Limited, the largest public commercial bank of the country. She is a member of the Civil Society Advisory Group of UN Women. She also holds positions in different committees of various national and international organizations. She is a Global Ambassador of The International Alliance for Women (TIAW) and also a Course Teacher of MBA class (Tourism & Hospitality Department) in University of Dhaka. She acts as a mentor for women in the Cherry Blaire mentoring program and also for many other women around the globe.

She obtained graduation and Masters in Business Management from Dhaka University and did short courses from USA, Japan, Denmark and Canada. She is a fellow of Stanford University, USA.

She is committed by taking her core values about businesses, family and culture to the community and winner of many national and international awards for contributing to development. Her accomplishments have earned her the title of best female entrepreneur in Bangladesh by different organization in different time, best women achievers, 2005, 06 by Consortium of Women Entrepreneurs of India and TIAW World of Difference   Award 100, 2010 for bringing a difference for Women in Bangladesh by The International Alliance for Women (TIAW), Canada and Priyadarshini Award by Federation of Indian Women Entrepreneurs (FIWE). She has also been awarded the Islamic Development Bank (IDB) prize 2012 for Women’s Contribution to Development in recognition of her outstanding leadership and ability to utilize financial networks to promote the development of women entrepreneurs in Bangladesh. She received “Jeane J. Kirkpatrick Award2013” by International Republican Institute, USA. She has been awarded with the prestigious Oslo Business for Peace Award 2014.

Ahmad was a speaker for the 'Fostering a Way Forward: Empowering Women Entrepreneurs in the Global Economy' panel at the The Empowerment Bridge: Building a Lifetime of Opportunity for Women and Girls forum in 2015.