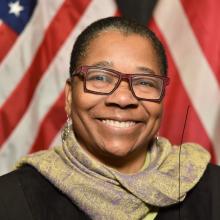 Sheila is a community activist in the truest sense of the word. Her work to shed light on issues affecting the voiceless among us cuts across every line that could divide us; gender, race, socio-economic status, education level, and sexual orientation. Prior to serving as the Director of the Mayor's Office of LGBTQ Affairs, Sheila was the Director of Strategic Engagement at the Washington City Paper, Vice President of Strategic Initiatives at the Washington Blade, founder and former Executive Director of the Women in the Life Association, as well as host of Inside Out, D.C.’s only FM, LGBTQ, radio show which still airs Tuesdays at 2 PM on WPFW (89.3 FM).

In addition, Sheila formerly served as the Vice-President of the Gertrude Stein Democratic Club and represented Stein on the DC Democratic State Committee. Sheila has championed causes for young people, women of color, the LGBTQ  community and survivors of domestic violence.

Today, Alexander-Reid proudly serves as Director of Mayor Muriel Bowser's Office of LGBTQ Affairs. One of the most progressive jurisdictions in the country, the District of Columbia ranks the highest on the Human Rights Campaign's State Equality Index. Ten percent of D.C.'s 750,000 residents self-identify as LGBTQ. This percentage is the highest of any jurisdiction. Despite these great stats and accolades, Alexander-Reid faces her biggest challenges yet: She is responsible for finding housing for homeless LGBTQ youth, training government employees in LGBTQ cultural competency, and creating alternative employment opportunities to survival sex work for Transgender women.

There are new challenges as well. As hate rhetoric has thrived in the current political climate, Alexander-Reid and her staff have made public safety a priority as well. The goal to ensure that all LGBTQ residents are safe, respected and have access to all the resources that D.C. government provides is an ambitious one, but Sheila Alexander-Reid and her office staff are up to the challenge.