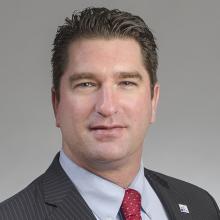 Simon joined United Way as Vice President for Resource Development in December 2013, to lead the agency’s fundraising initiatives to advance education income and health initiatives in our community which have raised more than $120 million during the last three years. In 2016 Simon was named Interim President and CEO of United Way of Greater Cleveland.

He has previously has held executive and senior level fundraising positions in the higher education, health and human service sectors.

Simon earned a bachelor’s degree with honors in education from Christ Church University College in Canterbury, England and a master’s degree in philanthropic studies and certificate in fund raising management from the Lilly Family School of Philanthropy at Indiana University and is a member of the Association of Fundraising Professionals.

Simon will moderate the panel discussion and present on United Way’s investment in the Wraparound Strategy which organizes and integrates social service resources around students to eliminate barriers to learning as well as engages families and community members in the success of students in 25 local schools.

United Way of Greater Cleveland and the Cleveland Metropolitan School District partnered to implement wraparound strategies in 25 of Cleveland’s lowest performing schools, including several high schools. The goal is to turn around the students’ performance by addressing obstacles to learning.

Research identifies three major detractors that negatively influence school performance: attendance, behavior and lack of core competencies. In the wraparound schools, United Way partners with local non-profit service providers to place a coordinator whose sole purpose is to identify socio-economic detractors and to provide access to resources in the community to fix them.

The 2016/17 school year will represent he the third year of investment in the wraparound strategy. Simon will focus on some of the successes and United Way’s commitment to empower ​healthier ​individuals ​and ​communities ​through ​education, ​employment, and ​income.