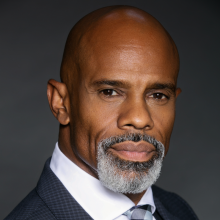 Ted Bunch is an educator, activist and lecturer working to end all forms of violence and discrimination against women and girls. As the chief development officer for A CALL TO MEN™, Ted is internationally recognized for his efforts to prevent violence against women while promoting a healthy, respectful manhood. He is a leading voice on issues of manhood, male socialization and its intersection with violence, and preventing violence against all women and girls.

Ted is the former director and co-creator of the largest program for domestic violence offenders in America. His innovative work laid the groundwork for the prevention strategies now endorsed as best practice in engaging men to end violence against women. Ted developed and implemented model response programs for police, fire departments, emergency medical technicians, paramedics and other first responders dealing with domestic violence.

Ted is an adviser to the National Basketball Association, providing policy consultation and facilitating violence prevention and healthy manhood training. He has also provided training to the National Football League, National Hockey League, Major League Soccer and Major League Baseball. He was invited to help lead the #TimesUp Engaging Men efforts and is providing ongoing healthy manhood and sexual harassment prevention training throughout the entertainment industry, at organizations like CAA, UTA and WGA.

Ted was a guest presenter for the United Nations Commission on the Status of Women and the United Nations Alliance of Civilizations. He is an international lecturer for the U.S. State Department and was appointed by UN Secretary General Ban Ki-moon as a committee member to UNiTE, an international network of male leaders working to end violence against women. Ted’s work has been featured in the UK, Israel, India, Suriname, South Africa, Ghana, the Democratic Republic of Congo, Brazil and Puerto Rico.

Ted is the co-author of the LIVERESPECT™ Coaching Healthy & Respectful Manhood Curriculum, designed to prevent violence and bullying in school and sports. He is sought after for his impactful and engaging sexual assault prevention programs for high school and college aged boys, and has trained extensively in colleges and universities. Ted is a frequent guest on national television and radio programs like The Today Show and National Public Radio, and has served as a script consultant for the Emmy Award-winning television series “Law & Order: Special Victims Unit” and for the Broadway musical Jagged Little Pill.