U.S. Chamber of Commerce Foundation / Are Dropping Appropriations Really to Blame for Tuition Hikes?
Center for Education and Workforce
September 26, 2012

Are Dropping Appropriations Really to Blame for Tuition Hikes?

Earlier this week, the Federal Reserve issued a report which found a link between soaring tuition costs at public institutions and cuts to state appropriations. They conducted the study to determine whether or not increases to federal grants and loans were encouraging institutions to raise their tuition-based revenues (they did not find evidence to support the conclusion).

Per the report: “However, our analysis suggests that public schools are increasing tuition as a way to make up for decreasing state and local appropriations for higher education, and that deeper cuts in public funding may be associated with correspondingly greater tuition hikes.”

On the surface, it’s pretty hard to argue. The share of revenue institutions receive from appropriations as compared to tuition has been dwindling for some time now, with a sharp downward spike occurring during the 2008–2009 school year, just after the recession took hold. 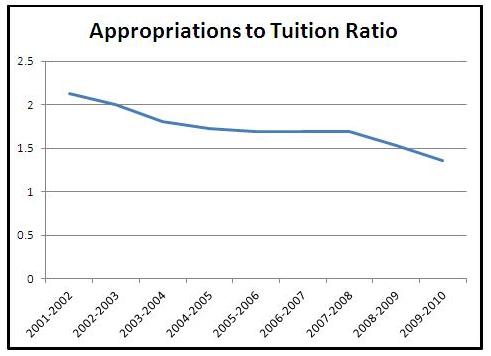 With that in mind, it only stands to reason that schools would jack up tuition to make up for the shortfall. Unfortunately, that doesn’t tell the entire story here. To fully comprehend the situation, you really need to take a long term, inflation adjusted view. 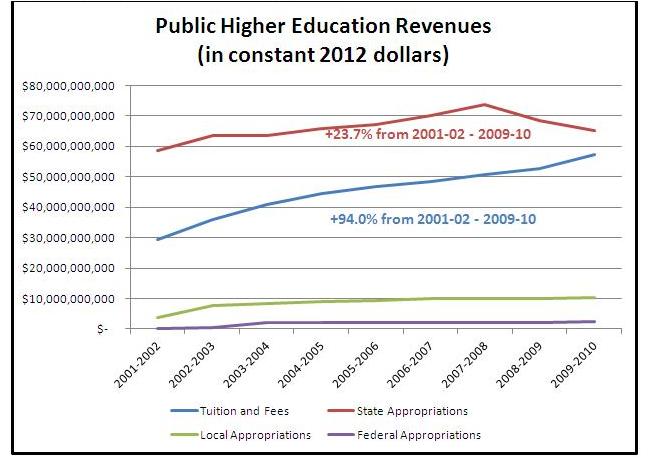 You might say, “Okay, but more kids are going to college. That has to impact revenue. More students means more paying customers.” You’d be right, of course, but it doesn’t matter as much as you might think. 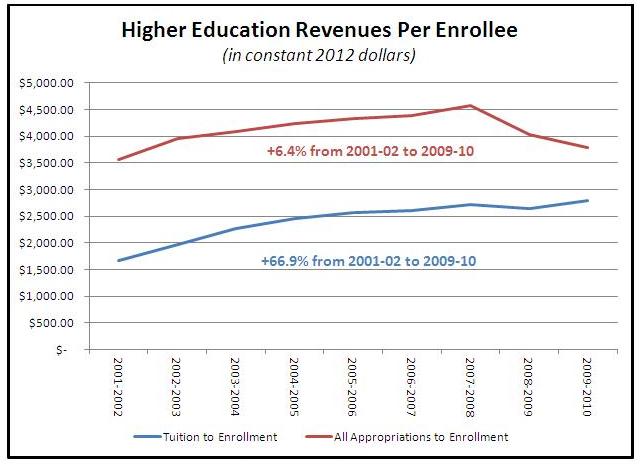 If you look at revenues per enrollee, the picture doesn’t change substantially. And here, you still see a net increase of 6.4% for appropriations, even after inflation. Tuition, meanwhile, still maintains a fairly steady upward trend that goes well beyond what inflation alone can do, as revenues from tuition per enrollee increased by more than two-thirds over that nine-year period.

So what accounts for that? What are institutions spending their money on, and what has necessitated the spike in tuition? Well, let’s take a peek. 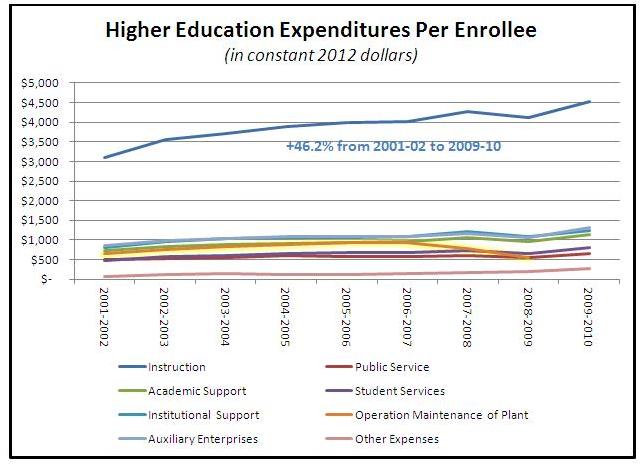 As you can see from the chart, non-instruction expenditures have remained fairly stable over these nine years, although there’s a somewhat surprising increase above inflation after 2008–2009. That seems counterintuitive, but overall we’re not talking about huge money here. It should be noted that there was a significant drop in money spent on “operation maintenance of plant”, which IPEDS describes as “expenses associated with operations established to provide service and maintenance related to campus grounds and facilities used for educational and general purposes.” If schools need to find a place to save some extra money, that’s not a bad place to start. Still, on a per-student basis, that’s really not going to scratch the surface of the spending problem, and it certainly comes nowhere close to offsetting expenses elsewhere.

Now, look at how much was spent on instruction over that period—a nearly 50% increase over a nine-year period, after accounting for inflation. Worse, look at the spike that occurs just as the economy is taking its toll on state budgets—that’s a 20% increase from 2007–08 to 2009—10. Instead of tightening the belt when times got tough, it seems institutions took the belt off entirely!

I know what you’re thinking—haven’t I been reading articles regularly that talk about faculty cuts or expanded use of adjunct faculty? How, then, could it be possible that instruction costs have soared? It could be a number of issues, but the most likely culprit is swelling pension costs (known as “golden handcuffs” in higher ed). It’s something that’s plagued K-12 education, too. A 2009 study by the Pew Center on the States estimated that states were about $1 trillion—yes, trillion—short of being able to pay for existing pension benefits. The University of California system alone is expected to spend a half a billion dollars every year on its retirement fund by 2015-16. Beyond pensions, rising remedial education costs, health care benefits, and good ol’ fashioned competition for the best faculty members also add a fair share to these unbounded instruction expenses.

Ultimately, there’s been a lot of talk about funding for higher education lately, and the story always seems to be that the sky is falling. Yet at the end of the day, however, revenues have not been dwindling. Quite to the contrary, higher education has literally never been more flush with cash than it is today, even after adjusting for the effects of inflation. The bottom line is that institutions have made no significant efforts whatsoever to keep their expenses in check. If you want to keep college affordable, this should be the only place to start.

Domenic Giandomenico is Director of Education and Workforce Progams at ICW.

Will COVID-19 Push Online Workforce Education To Its Tipping Point?
A 2020 Vision: The Future of Economic and Workforce Development in South Carolina
'I Seek to Be Part of the Solution.' Inspiring early enthusiasm for science.