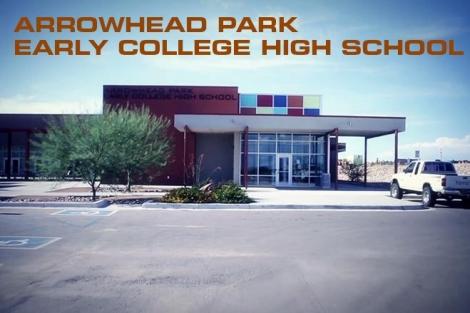 The landscape surrounding Las Cruces, New Mexico’s Interstate-10 is bare and tough. The packed scorched earth is interspersed with creosote bushes, the Doña Ana and Organ Mountains loom in the distance, and the white-dotted cotton fields are interrupted only by dirt roads and irrigation ditches.

After a while, a series of long-slung adobe buildings come into view, their bright blue and red glass shimmering in the desert heat like a 1960s Mondrian collage. This is Arrowhead Park Early College High School, a new type of high school that exists because of a partnership between the Las Cruces educators and business leaders.

With a population of 97,618, Las Cruces is the second largest city in New Mexico, and has a 5% unemployment rate—much lower than nearby El Paso (8%) and Albuquerque (5.9%). The city is home to a number of high-tech employers, including New Mexico State University, the White Sands Missile Range, Spaceport America, and Virgin Galactic. In addition, there are a multitude of businesses that supply goods and services to these specialized, high-tech employers.

Despite all the cool space-related jobs, the city has had a hard time creating the workforce to fill those jobs. In 2007-2008, the Las Cruces Public School District had a graduation rate of only 54%.

In 2007, the Greater Las Cruces Chamber of Commerce stepped in, bringing together leaders from business, education, economic development and the government. Together, they laid the foundation for what would become The Bridge of Southern New Mexico. The group had two main goals: achieving the highest high school graduation rate in New Mexico by 2016; and optimizing career and technical educational opportunities for students to satisfy the needs of business in Doña Ana County.

“The business community was saying, ‘we’re not getting a real good product out of (Las Cruces Public Schools),'” The Bridge committee chairman Patsy Duran told the Las Cruces Sun-News in 2008. It also was hurting efforts to attract new businesses, former President and CEO of The Bridge Tracey Bryan told District Administrationmagazine in 2011. “If half of the student body is dropping out, they don’t want to hear about it.”

The solution, The Bridge participants decided, was an Early College High School that would prepare students to graduate with both a high school diploma and a two year college degree in four years. Half the cost of the program would be paid by businesses and half by the public schools, community college and university. In addition, the Early College High Schools would provide vocational training to students who want to enter the workforce early.

In the fall of 2010, Arrowhead Park Early College High School opened its doors, becoming the state’s first Early College High School. The $18 million school has a variety of electives, but no performing arts or athletic programs. All students are required to take an introduction to engineering design course to get them thinking about possible careers. By all accounts, Arrowhead Park has been a success: to date, the school has not experienced a single dropout.

Another focus of The Bridge’s current work is a business internship program that provides strong return on investment for business and a fertile learning environment for students from high school to college. Research is currently underway with the business community to evaluate their needs and then work with educational institutions to build that training into their programs.

Watch the U.S. Chamber of Commerce Foundation’s Profiles of Change video featuring Kari Mitchell below, and see other stories at www.profilesofchange.org

Sheryl Poe is senior writer at the U.S. Chamber of Commerce

A Look Back at This Year's Impact in Preparation for 2023
U.S. Chamber of Commerce Foundation Launches ‘Design Challenge’ to Improve Public Education in America
Roadmap to Building An Equity-Driven Workforce