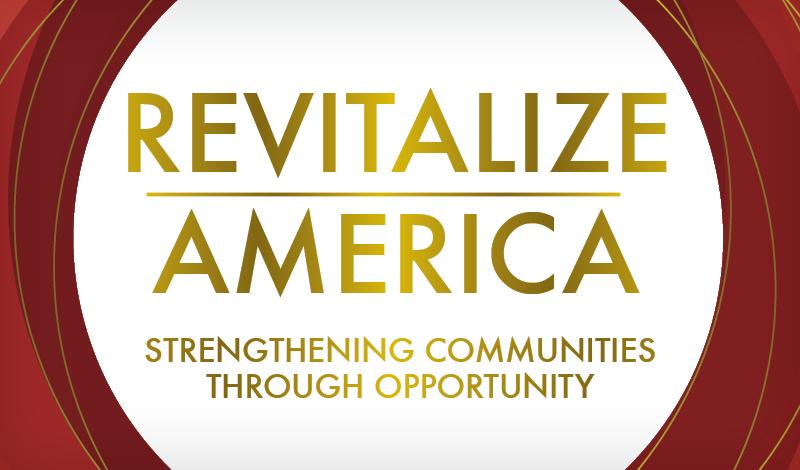 At the U.S. Chamber of Commerce Foundation, we understand the critical role of the private sector in creating vibrant communities. From community engagement to providing jobs—the strength of a locale and its people is directly tied to the strength of private sector investments. A study by the Economic Innovation Group found that most economically distressed communities have seen zero gain in employment or business growth since 2000, and half of adults living in distressed ZIP codes do not have the education or training to find employment in the modern economy.

Often, the most effective ways to turn around a struggling community is through business investment, growth, and opportunity.

While nonprofits and government can help, true change takes place when residents have pathways to good jobs. When people have meaningful job opportunities, other important community characteristics such as safe neighborhoods, access to nutritious food, and high-performing educational systems follow.

Now in its third year, the U.S. Chamber Foundation honors three businesses with the Revitalize America Honor at the annual Citizens Awards gala, which took place on November 14, 2019. These honorees are helping build stronger communities by investing in employment opportunities in the U.S.

Atlanta, Georgia, continues to be an engine for economic development and growth, and a major business responsible is one of the city’s oldest—Cox Enterprises.

Cox Enterprises (and its operating subsidiaries Cox Communications, Automotive, and Media Group) has 55,000 employees globally and has brought thousands of additional jobs to Atlanta in the past decade.

Besides its role driving economic development and labor growth, Cox Enterprises matches its role as employer with its role as corporate citizen. Through substantial efforts in environmental sustainability, community empowerment, and diversity, Cox has shown that corporate stewardship is an important aspect of how companies and their communities interact.

Team Cox is the company’s employee volunteer force. Last year, it brought 88,000 volunteer hours to programs across the Atlanta metro area, ranging from a partnership with KaBOOM! to build playgrounds, Habitat for Humanity to build homes, and Park Pride to help clean up parks, landscapes, and neighborhoods.

Across the U.S., DSM operates 34 sites across 20 states—in cities large and small. It plays an important role in all of them as an economic engine and employs a broad range of skilled employees, from materials scientists to agricultural professionals. All employees are empowered to “do something meaningful,” DSM’s imperative to improve the world.

DSM offers strong employment options and an opportunity for its employees to change the world and their communities. One of the most impactful ways to do this is through DSM’s commitment to transition to a low carbon economy and dedicated shared value investments in renewable energy, such as the 66-acre solar field in Belvidere, New Jersey; the 1MW solar field in Kingstree, North Carolina; and a 128MW windfarm in Minko, Oklahoma.

DSM’s opening of cellulosic ethanol plant in Emmetsburg, Iowa, which turns crop waste into fuel, created more than 250 jobs throughout Iowa, and is estimated to have a $24.4 billion impact in economic growth over 20 years for the state.

DSM combines economic development with a business model that delivers a powerful message showing that the business case for renewable power continues to grow. The clean energy transition is increasingly powering DSM’s business in a way that creates brighter living for people today and generations to come.

Much of Oshkosh, Wisconsin’s economic development over the past five years is driven by Oshkosh’s largest employer, Oshkosh Corporation. Founded in 1917, Oshkosh Corporation is a global leader in producing vehicles and heavy machinery for the military, first response, automotive, construction, and waste removal industries.

In 2018, Oshkosh contributed $1.9 million in charitable giving to help support communities. Partners include Habitat for Humanity, Boys and Girls Club, and the National Fallen Firefighters Foundation. Oshkosh partners with Feeding America on a signature program, “Feed the Body, Feed the Soul,” a 24-hour food packing program that last year prepared 599,000 lbs of rice for distribution across Northeast Wisconsin.

In the workplace, Oshkosh strives to maintain a diverse and inclusive culture. It partners with the U.S. Chamber of Commerce Foundation’s Hiring Our Heroes program, and it empowers a Diversity and Inclusion council to help foster internal development and streamline external partnerships.