A Brief History of Your Thanksgiving Dinner 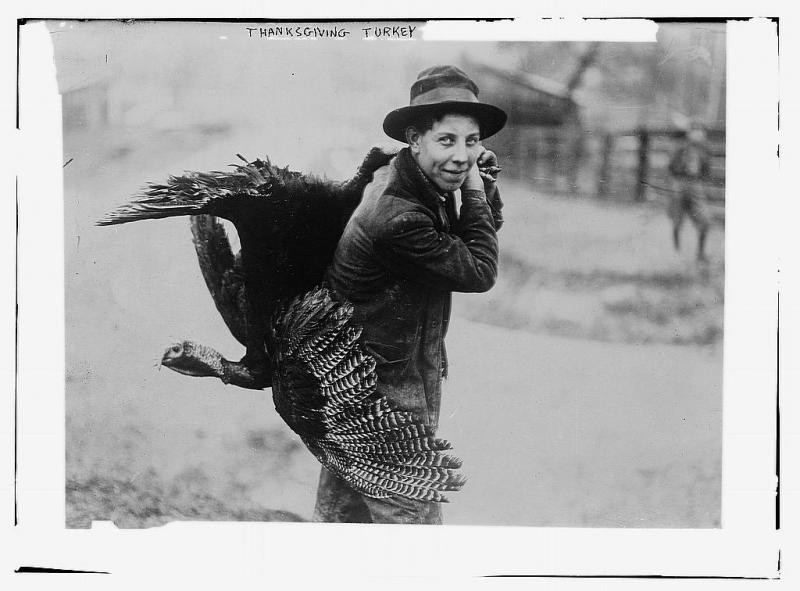 America's economy has been influenced by remarkable advancements over the course of the 20th century. We are more productive than ever. Our shelves are stocked with more goods at lower prices. Nevertheless, this progress often occurs over long periods of time and in ways invisible to the average consumer. This is especially true for our Thanksgiving meals. From the turkey's to the cranberry sauce, what we eat now and how it gets to our plates is far different today.

Turkeys are huge staple of every Thanksgiving meal. Actually, let's emphasize the "huge" aspect for a moment. These birds are bigger than they've ever been. A 2007 USDA report found turkey growers had become 41% more efficient since 1986, with turkeys weighing over 8 pounds more on average.

Much of these gains can be credited to a sea change of how turkeys are grown. Until recently, one farm would take a turkey from egg to slaughterhouse. Today, each step is specialized:

Eggs are produced at laying facilities, some of which have had the same genetic turkey breed for more than a century. Eggs are immediately shipped to hatcheries and set in incubators. Once the poults are hatched, they are then typically shipped to a brooder barn. As poults mature, hey are moved to growout facilities until they reach slaughter weight. Some operations use the same building for the entire growout process of turkeys. Once the turkeys reach slaughter weight, they are shipped to slaughter facilities and processed for meat products or sold as whole birds.

And the stuffing inside turkeys? Not a new idea -- bread crumbs were first placed in poultry back in Roman times.

This hard, sour fruit has grown into a jellied staple of every Thanksgiving. Roughly 20% of all cranberries are consumed on this one day alone, helped along by the advent of cranberry sauce in 1912 by the Cape Cod Cranberry Company.

While the basics of growing have remained the same since cranberries and meat were first eaten together in 1663, technology has made the process of picking cranberries vastly more efficient. For instance, farmers used to pass cranberries through long wooden slats as they inspected them for color and imperfection. Massive computerized scanners do the same job today.

Other farmers are using hybrid cranberries that are hardier and plumper. These are being planted in bogs that have been designed for denser planting and faster harvesting. And they are being showered with computer-controlled, automatic sprinklers that help conserve water. A 2006 report by UMass Dartmouth found though that "60% of farmers have not made any changes in how they farm over the past five years." They clearly still have a ways to go.

Sweet potatoes have for years been limited in reach, barely traversing beyond the Thanksgiving plate, and availability, particularly in other countries. No longer -- recent findings paint a renewed market for these orange-hued tubers:

Sweet potato consumption in the United States is increasing – a dramatic 13% from 2006-2008. Likewise, exports of U.S. sweet potatoes are rising. There was nearly a three-fold increase over the past decade, from $8.3 million to $31.3 million. And the technology is rapidly changing. New advances in packaging and preserving sweet potatoes offer expanded marketing opportunities.

If it's November, green beans are usually seen smothered deep in cream of mushroom soup and French friend onions. Casseroles like this were first seen in 1955, courtesy an employee of the Campbell Soup Company named Dorcas Reilly. Her 8x11 recipe card is now displayed at the National Inventor's Hall of Fame alongside Edison's lightbulb. Today, her casserole has an outsized impact on all of its ingredients; roughly 50% of all French fried onions, for instance, are sold during Thanksgiving, Christmas, and Easter, when the dish is most prevalent.

Pumpkin pies had been baked in England long before the Pilgrims came to America's shores, but it wasn't until the early 19th century that it first made its way into this country's cookbooks. The biggest advancements in piemaking though came with the introduction of industrialized processes, best seen in your local Costco:

Sometimes we discover foods and recipes that stand the test of time, that no invention need overturn. That may well prove true with pumpkin pies. If so, we can still count on new ways to make and distribute these to tables around the world.

When you sit down for Thanksgiving this week, take a moment to consider the  ways large and small that the meals has improved over the years. Your stomach and wallet will thank you.