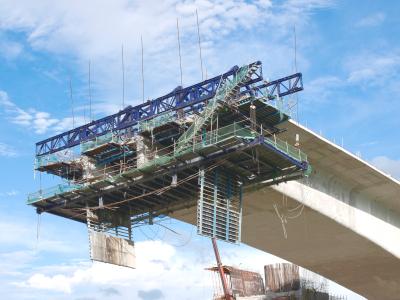 America's infrastructure is in a sorry state.  More money and more care are needed for our transportation networks, energy systems, sewers, and all of the other frameworks that keep America running, but it's not happening at the pace and scale needed.  It's been estimated that more than $2.2 trillion will need to be invested over the next five years if Americans want to see their current infrastructure improved and expanded.  This infrastructure is getting older due to years of under-investment, reaching forty-year highs for the average age of all categories of infrastructure.

As the attacks on 9/11 showed as well, investing in infrastructure is more than a matter of dollars and concrete.  We have to take risks into account, ensuring that, should the worst occur, our nation's infrastructure can bounce back.  This may seem a tall order in the face of DC's financial and political traffic jam.   Yet, as a recent study by the National Chamber Foundation (NCF) found, public-private partnerships (PPPs) may be just what's needed to fund and protect America's infrastructure for the future. Federal, state, and local taxpayer dollars are scarce, that much we know.

At present, we only spend 0.6% of our GDP on infrastructure, compared to, say, France at 1.53%.  That funding ratio is due to keep declining.  Yet, we still have to pay for the maintenance and improvement of America’s national transportation infrastructure network.  The maintenance backlog for our nation’s roads and bridges is $624 billion and growing, yet total federal, state, and local capital spending on infrastructure adds up to only $78 billion a year. America’s inability to improve and expand its infrastructure will directly result in the loss of economic productivity as crumbling highways and aging bridges impede the flow of products to markets at home and abroad.

The World Economic Forum recently dropped America in its ranking of infrastructure competitiveness to 15th in the world this past year.  Just five years ago America was ranked number one.  So, even as our national government cuts spending and reduces the deficit, it is imperative that the United States maintains – at a minimum – the same level of federal investment in infrastructure while exploring new strategies and relationships to address our needs. One such strategy is linking public sector funds with private sector capital.

These public-private partnerships go beyond just leveraging public funds.  They make infrastructure more efficient and, often, more resilient.  With shared risks and funds come additional sources of oversight and a greater potential for innovation.  On the investment side, PPPs bring market pressures along with private capital, thus making it easier to get projects off the ground and in a cost-efficient way.  On the resilience side, PPPs focus the attention of a broad array of stakeholders on the "long-term sustainability of facilities" since they're also "responsible for the long-term upkeep."

The U.S. Chamber's Let's Rebuild America initiative, which I am proud to head, cooperated with the National Chamber Foundation last year in the development of an event and original research on this very topic of increasing infrastructure investment and resilience.  The result was a recently released NCF white paper by Eric Boyer on "How PPPs Can Influence More Durable Approaches to U.S. Infrastructure."  I’d encourage you to read it in full. The cost imposed by disasters in 2011 -- $265 billion -- was the highest the world had ever seen.  This cost will only rise as we continue to build and repair infrastructure that is increasingly interdependent.

In the face of rising austerity and global competition, investing in infrastructure that is also more resilient will be one of the great challenges of the 21st century.  It is time that we find solutions to match.  Joining together the resources and efficiency of the private sector with the authority and interests of the public sector may be just the answer.