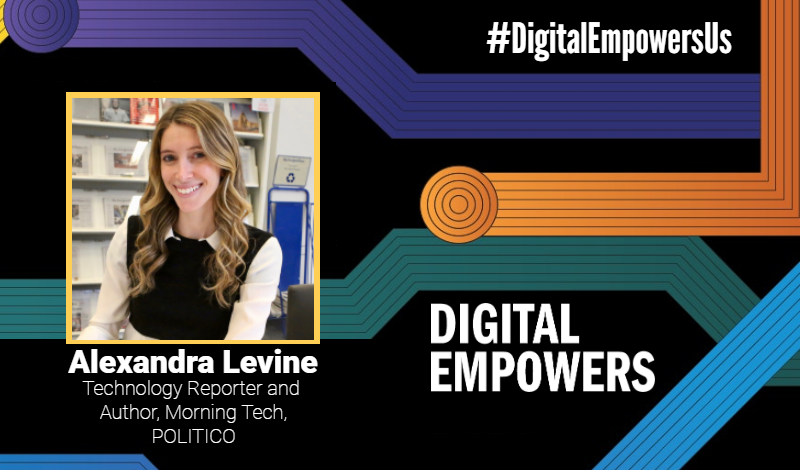 Alexandra S. Levine is a reporter covering the intersection of technology, government and public policy — as well as the broader crosscurrents between Silicon Valley and Washington D.C. She currently reports on these topics for POLITICO, where she also writes POLITICO’s popular daily newsletter, Morning Tech. This year, she is focused in particular on how tech is shaping the 2020 U.S. presidential election. I sat down with ask her about her role as a journalist covering the tech world and to learn how she has seen topics surrounding women evolve within the areas she covers.

Who is someone you look to as your Wonder Woman?

My wonder woman is my mom. She’s an obstetrician-gynecologist (OB-GYN) who has brought thousands of new lives into the world and she’s also been an incredible advocate for thousands of women. Her career has actually served as the inspiration for my first book. (More on that soon!)

Describe your current work in tech and how it is positively impacting the innovation ecosystem.

Since joining POLITICO as a tech reporter a year ago, I have been covering how existing and emerging technologies are shaping our daily lives and the way our government is responding to that. Technology is evolving incredibly quickly, and with that innovation comes both excitement about the doors it can open as well as concern about the issues it might inadvertently create. My job has been to track and unpack both sides of that coin — reporting on the developments themselves, and also on the political debates, policy implications and ethical questions underlying them.

I am particularly interested in the ways technology can take on the biggest societal challenges of our time. Right now, for example, we are seeing artificial intelligence being used to strengthen election security, drones being deployed during natural disasters, and telemedicine expanding healthcare access, to name just a few. So in addition to covering the day-to-day happenings on the [Capitol] Hill and breaking news out of Silicon Valley, my goal has also been to highlight the people driving these stories and to help contextualize how, if adopted at scale, these technologies could fundamentally change the way we live.

What led you to covering the tech space?

I moved to Washington, D.C. specifically to pursue the tech beat and I chose to cover tech above all else because it has become so central to our daily lives. On a personal level, the tech I've come to rely on, whether it's the apps, my gadgets, the internet itself — they've all changed the way I go about my own daily routines and, perhaps more importantly, the way I interact with others and engage with the world around me. Even reporting on this eight days a week, there’s so much about the technology I'm using that I find difficult to wrap my head around and that I'm constantly learning more about. My hope is that as I continue learning myself, I can also help inform others.

Have there been any collaborations or campaigns that you've participated in to advance women in tech or tech-for-good?

One of my most memorable experiences doing this was actually at the 2019 U.S Chamber Foundation’s Digital Empowers Summit where I had the opportunity to interview two women CIOs on a panel about women's leadership in the Fourth Industrial Revolution. We talked about how tech has changed the workforce in the past, how women are changing tech in the present, and why women having a seat at the table is critical to our success in the future.

I have also made a concerted effort to bring together the women covering tech in Washington, D.C., which surprisingly is a relatively small number. When I first started covering tech, I was struck by how few female reporters there were and still are in this space. (A report recently found the breakdown of tech reporters to be, on average, about 70% men and 30% women.)

Rather than looking at underrepresentation as an obstacle, I've come to see this as an opportunity to create a community. This spring, I’ve organized a gathering for local women covering tech policy to collaborate on ideas and share experiences about navigating this part of journalism. My hope is that this small but tight-knit group of female tech reporters will carve out a stronger place for women in this male-dominated space. I am also teaching a journalism course this summer through the School of the New York Times — a seminar for high school students on government, law and ethics in tech; I plan to touch on these issues there as well.

Finally, POLITICO's Women Rule program, led by our wonderful Playbook co-writer, Anna Palmer, seeks to do the same community-building but on an even larger scale, drawing together women at all stages of their careers to learn from each other, nurture their leadership skills, and network.

What trends are on the horizon and why is it so important that women are bringing those trends into the marketplace?

We're seeing more and more women in the highest ranks of the world’s most powerful tech companies. CEOs in this space are still, for the most part, men. But if you look beyond that singular title, you will notice that women are often making the most important, complicated, invaluable business decisions. (Look no further than the COO of Facebook, the CEO of YouTube, which is owned by Google, and the top lawyer at Twitter — all women.) And it's not just at the top rung! We’re seeing more and more women across every level of these organizations, representation that is vital to ensuring that women’s views are reflected in everything from workplace policies to new technology and projects these companies are pursuing.

Of the many interviews and thought pieces you’ve conducted what is the most commonly cited obstacle that women experience entering or advancing in tech?

Lack of mentorship is a big thing.

I recently heard one of the most jarring stories from a woman working at a top tech company. In short, she shared the exciting news of her engagement with her boss, and instead of congratulating his colleague, he encouraged her to not wear the ring into work because it would signal to others at the company that she intended to stop working soon. These notions have long been pervasive in business, but many women I've interviewed have told me it’s equally problematic in tech. We need more open dialogue and mentorship — from both the women and the men in power, and among the middle managerial roles — to shift these conversations dramatically, and ultimately to prevent them from happening altogether.

What is your most recent Google search?

My most recent Google search was: How do you know if spaghetti is al dente? How much should it curl?

If you could interview any business or community leader working in tech and social impact—who would it be?

I would have loved to have interviewed Katherine Johnson, part of the cohort of black women mathematicians at NASA, who passed away this week. I chose her because she began her career working with the simplest, most low-tech technology and finished working with the most complex, high-tech technology. In the process, over her decades at NASA, she opened so many doors for women — racially, professionally, and across the board.