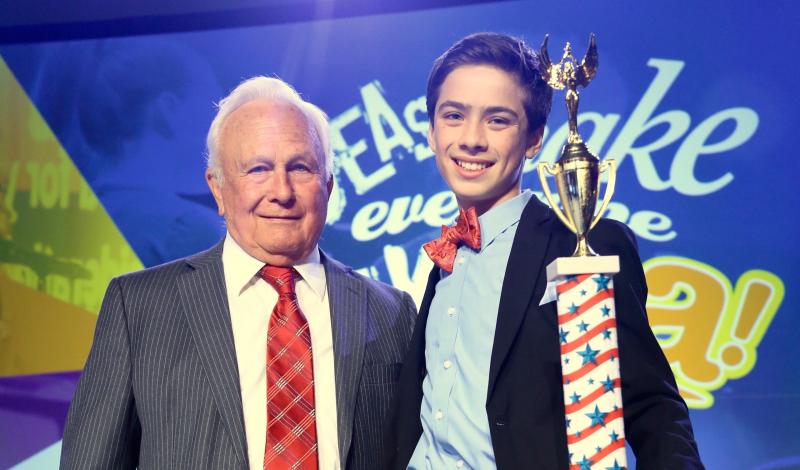 A 14-year-old Tacoma, Wash. native proved that hard work and dedication does pay off, earning various prizes including $30,000 in college scholarships after presenting his business plan for a company that makes durable grips for lacrosse sticks.

Maxx Stewart, the CEO of Spyder Grypz, beat out nine other finalists from six companies to win the Young Entrepreneurs Academy (YEA!) Saunders Scholars competition, winning over a panel of judges at the U.S. Chamber of Commerce America’s Small Business Summit on June 13.

Stewart, who is a lacrosse player himself, said he grew tired of constantly having to replace traditional tape on his stick, so he created his own solution — a durable, rubber-based grip meant to last an entire season without being replaced.

He discovered the skills needed in creating a successful business through the YEA! chapter sponsored by the Tacoma-Pierce County Chamber of Commerce. YEA! is supported by the U.S. Chamber of Commerce Foundation and Sam’s Club. Stewart reached the national finals after pitching his business to judges at the local and regional level.

Stewart said he understood first-hand the disappointment players feel when they miss a game-changing shot due to the lack of grip on their stick. He said that after missing one too many of those shots, he knew there had to be a better solution than the everyday athletic tape.

“There have been no innovations in this market until now,” Stewart said. The only competition to his product is standard athletic tape, but Spyder Grypz was “created to replace lacrosse tape.”

Stewart said he is in the process of securing a professional lacrosse player’s endorsement. In addition, baseball and softball players have reached out to Stewart praising his product, and he said Spyder Grypz could also be used on handtools.

Stewart said the Spyder Grypz can easily be applied by a heat gun or hair dryer with “adult supervision,” and can last more than an entire lacrosse season.

Not only did Stewart win college scholarship money, he also won a business prize package from Toshiba and Blue Tie.

Second place was awarded to Ethan Shapiro and Ryan Shnider, business partners of Snap’d In, which brings a fully customizable and changeable phone case to the technology marketplace.

Third place, and the People’s Choice Award, went to Emily Guertler, the creator of Straight Shot Apparel, a clothing line that eases the issues that insulin shots bring to families with diabetic children.

Stewart is not the first YEA! graduate to channel their love for lacrosse into business success. Fifteen-year-old Rachel Zietz of Florida launched Gladiator Lacrosse out of a YEA! program and has since expanded the business to more than $1.5 million in revenue.

The U.S. Chamber of Commerce Foundation has been a national sponsor and partner of the YEA! program since 2011. To find out more information, visit www.uschamberfoundation.org/yea.