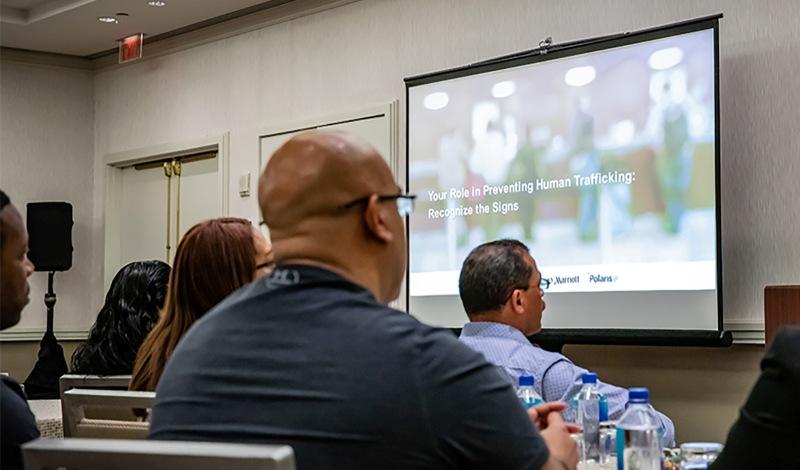 According to the International Labor Organization, over 40 million people are trapped in some form of slavery. Many of those people are victims of trafficking or can end up in situations of forced labor. While no country or industry is immune to human trafficking and forced labor, we unfortunately know that hotels and motels are sometimes used by traffickers to conduct and perpetuate these illicit crimes. That is why Marriott International committed to make 750,000+ hotel workers and 6,900 properties worldwide a part of the fight to combat modern slavery.

We are proud to share that, as of the end of January, the company has successfully trained 500,000 hotel workers to spot the signs of human trafficking on property, and how to respond if they come across suspicious activity.

"Human trafficking is a horrific form of modern slavery that entraps millions of people around the world," said Arne Sorenson, President and Chief Executive Officer of Marriott International. "By educating and empowering our global workforce to say something if they see something, we are not just standing up for the most vulnerable in society, we are also protecting associates and guests as well as living up to a core company value—serving our world."

To reinforce the training, Marriott released its first-ever public service announcement on human trafficking “A Million Eyes” to further promote and build awareness on common indicators that hotel workers and guests can learn.

We also recognize that beyond awareness training of hotel associates to spot the signs of trafficking, job training that offers survivors an opportunity for self-sufficiency and economic independence are vital to mitigating the risk of survivors ending up back in situations of exploitation. Businesses have an active role to play, which is why last year we partnered with the Global Fund to End Modern Slavery (GFEMS) to co-develop a job readiness curriculum focused on hospitality that supports survivors of human trafficking.

Additionally, we are excited to share that at the start of 2019, we became the first hotel company to embark on a collaboration with Polaris to design and scale public-facing posters and signs that will build awareness on the indicators of trafficking—and how to contact the National Human Trafficking Hotline—if someone should recognize those signs. In addition to hotel workers, educating guests to understand and recognize common indicators and empowering them to know how to report potential trafficking situations is another way we can be part of the solution.

While our hotels are stepping in to combat modern slavery, we know that we aren’t the only ones taking on this fight. Last month, in honor of National Slavery and Human Trafficking Prevention Month, we hosted an event at the Sheraton in Times Square inviting nonprofits, business partners, government agencies, peers in the hotel industry, and survivors to share the impact, innovations, and partnerships they are developing to address this global challenge. We heard directly from the Founder and Executive Director of Mentari, Shandra Woworuntu, on how we can better empower survivors as they get back on their feet. We spoke with Martin Laird at IBM on how the company is harnessing their technology to assist law enforcement investigating trafficking cases. Director of Grant Programs for GFEMS, Helen Taylor, discussed how the organization is investing in market-based solutions that can scale globally.

We can achieve more progress by joining forces across the business, government, and nonprofit sectors and collaborating with each other on solutions to end human trafficking.