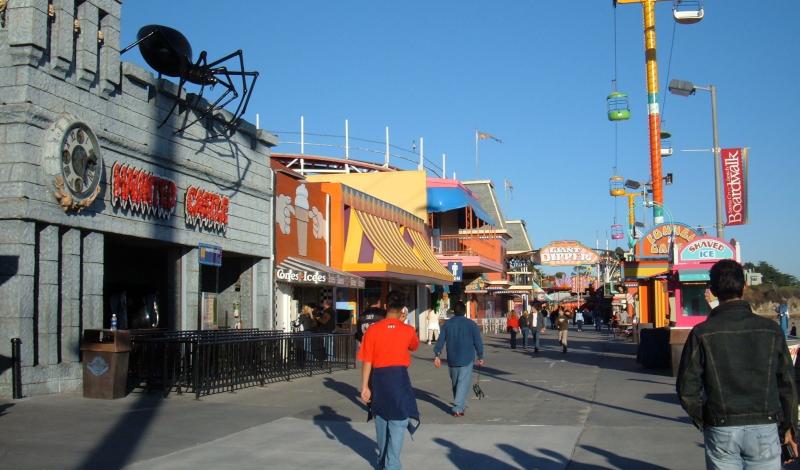 View of the boardwalk in Santa Cruz, CA

Santa Cruz made history as the place where in 1885 surfing was introduced to the U.S. mainland. Nowadays, it’s also known as the California coastal city where small businesses make big waves.

Take a company called the Surf Office. That’s a communal-workspace company with an unusual perk. If you need a break from office work, you can — what else? — go surfing. Surfboards are provided. The beach is right outside the front door.

Then there’s Best Baby Rentals, which lets you rent a stroller, a crib or baby toys if you’re visiting Santa Cruz with your family. And if you’re into beer, hop on Brew Cruz, a converted school bus that offers tours of the area’s craft breweries.

“Santa Cruz is a very creative city,” Surf Office co-founder Emmanuel Guisset tells NerdWallet. “It has always been full of artists, hippies and surfers, but now more and

more startups are popping up, and this creates a creative and innovative environment with different values than Silicon Valley or San Francisco.”

Jeremy Neuner, chief executive and co-founder of NextSpace, cites residents’ work ethic as well as their love of fun. NextSpace is another successful collaborative-workspace company and has already expanded to cities including Los Angeles and San Francisco.

“People want to live here,” he tells NerdWallet, “because they want to work hard and play hard.”

There’s a considerable reserve of creativity and talent in Santa Cruz, says Brent Haddad, director of the Center for Entrepreneurship at the University of California, Santa Cruz.

You need “a whole bunch of things in place” for that environment to  flourish, he tells NerdWallet. Among them, the city “has to have smart, creative people. And Santa Cruz has that in spades.”

Some of the city’s entrepreneurs are people who just came to visit but “ended up falling in love with Santa Cruz and not wanting to go home,” says Rebecca Unitt, economic development coordinator with the city.

That’s what happened to Zach Davis. “Santa Cruz was a place we fell in love with as residents,” he tells NerdWallet.

A few years ago, he and veteran pastry chef Kendra Baker started the Penny Ice Creamery, which makes ice cream from scratch. They eventually expanded the venture into other restaurants now collectively known as The Glass Jar. Their company stresses sustainable food and community, and it became such a shining example of a successful small business following the financial crisis that Baker and Davis were invited to be guests at President Obama’s 2011 State of the Union address.

Willing to take a risk

Davis cites the Santa Cruz environment as one of the keys to their success. “There’s a tremendous amount of … people who are willing to take a bit of a risk,” he says.

Bud Colligan, CEO of the investment firm South Swell Ventures and the former chief executive of Macromedia, pointed to “a broad range of very educated and qualified people” whom small companies can easily tap and a “supportive political environment.”

In some ways, Santa Cruz, a city of 63,400 tucked away in a corner of the Central California coast known for its colorful surfer scene and hippie communities, is an unlikely haven for innovative small-business pioneers.

“Santa Cruz has attracted a motley group because it’s off the beaten track and such a beautiful place,” she tells NerdWallet.

“We have a top-notch university, UC Santa Cruz, so we have the movie theaters, coffee houses and bookshops that intellectuals love. At the same time, we’re surrounded by jagged mountains, towering redwoods and some of the best surf breaks in the world. Who would choose to live in a place like that? Turns out, a lot of creative people do.”

A small-business owner, even someone just starting out, can expect support from local government and organizations and the community itself, says Krista Bordner, who quit her Silicon Valley job to start Best Baby Rentals.

“It’s overwhelming how supportive people have been,” she tells NerdWallet. “It just felt so good to feel supported by our local community and local businesses, to know that they want me to succeed as a small business.”

Christina Glynn, communications director for the Santa Cruz County Conference & Visitors Council, echoed this sentiment, calling Santa Cruz “a perfect environment” for business leaders and innovators. “We are so open to new ideas and thinking outside the box,” she tells NerdWallet.

That openness is shared by city and business leaders. Davis of The Glass Jar praises Santa Cruz for offering “some really valuable resources for business.” You can see what he’s talking about on the Santa Cruz city government website, under “Business Support.”

A central feature of the website is Open Counter, the online system the city developed with Code for America, a nonprofit focused on transparency in government. It was set up a few years ago to help entrepreneurs hoping to set up shop in Santa Cruz.

It’s a critical tool for anyone thinking of opening a small business in the city. With Open Counter, you can go through the step-by-step process of setting up your small business in Santa Cruz. Included are a checklist of permits and licenses you’ll need to apply for and a schedule of the fees you will need to pay.

“Our role is to be the advocate for businesses in the community. We focus on providing resources at the early stages, when the business is just starting out,” says Unitt of the Santa Cruz Economic Development department.

In fact, it’s not just for businesses starting out. Davis of The Glass Jar said his company used it when opening his latest restaurant.  “It definitely got things moving a lot quicker, which was pretty cool,” he says.

“We have lots of experienced people here to help,” he tells NerdWallet.

One of them is Dolgenos of Cruzio, which started in 1989, even before the World Wide Web went live.  It’s no surprise that small companies such as Cruzio have managed not only to survive, but also to thrive despite facing stiff competition from giants including Comcast and AT&T, she says.

“Santa Cruz welcomes new and different ideas, so small businesses here have an advantage,” says Dolgenos, who is also the chair of the Santa Cruz County Business Council.

“People here think that something unique is a good thing. For a company like Cruzio, an independent Internet provider, that allows us to survive,” he says. “We compete with Comcast and AT&T, who have zillion-dollar ad budgets, and yet we have thrived. Our community is willing to support a local alternative to a national corporation.”

Of course, as with any city or region, expect to encounter challenges as a small-business owner in Santa Cruz. “I often sit down with people who are trying to figure out whether they want to jump in,” Tysseling says. “Starting a business anywhere is a daunting process.”

One challenge he cites is the high cost of housing. The median home price in Santa Cruz is $666,300, according to city data. A low-end one-bedroom apartment in Santa Cruz rents for roughly $1,300 to $1,500, Tysseling says. City and business leaders are looking to build higher-density units, he says, but housing costs are definitely a challenge for companies looking to locate here.

For one thing, it makes recruiting young workers more challenging. “We have a strong base of workers,” he says. “But in general, it is difficult to bring in skilled workers because of the cost of housing.”

Unitt, of the Santa Cruz Economic Development department, also cautions that despite “amazing” ideas for services and products, there can be bumps in the road. “Even having an MBA doesn’t always prepare them for how to get their small business established and growing.”

“Your business plan may be flawless, but your small business will encounter opportunities and adjust to the market,” Unitt says. “Small businesses are at their most precarious when fast growth pounces and vision, values, and strategy struggle to remain balanced.”

This is where city and business leaders can help, she says. “We can connect you with free, confidential, expert business consulting through the Central Coast Small Business Development Center to ensure your fast-growing business has the long game in mind as well.”

The good news is, according to those we talked with, meeting these challenges is more engaging and fun in a place like Santa Cruz.

If you’re thinking of starting a small business in the city, here are some good places to start: