One Scary Chart on Economic Growth in America 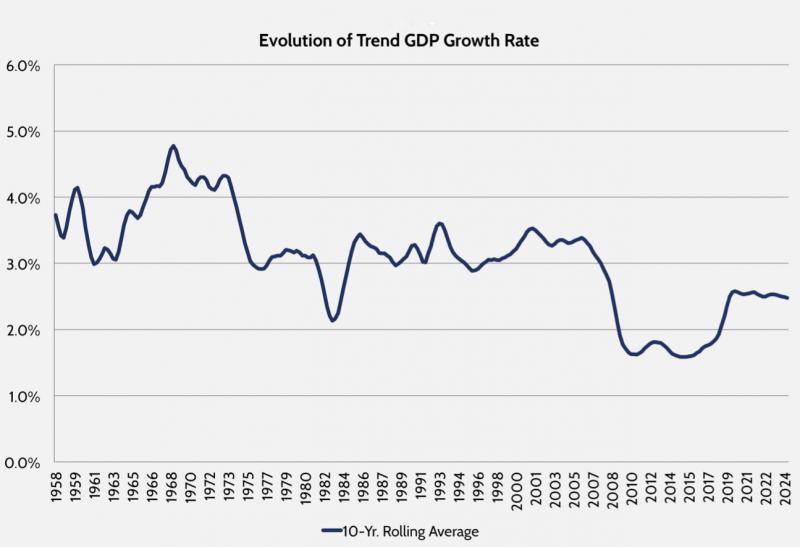 If you think economic growth is fine in America, here's a chart that may change your mind.

The above illustration shows the trend growth rate from 1958 to the present, with projections out to 2024.

Just look at what's happened since 2007.

The chart shows that there have been some ups and downs in growth over the second half of the 20th century, but the annual rate of growth generally stayed above 3% each year. This level of growth is largely responsible for the improvement in standards of living during that time period.

Since 2007, however, growth has been below 2% annually, and it's not projected to get better over the next 10 years.

This chart, based off projections from the Congressional Budget Office, suggests that growth will average 2.5% annually through 2024, even dropping down to 2% toward the end of the period.

What does this mean for America?

A new report from the U.S. Chamber of Commerce Foundation outlines our historical growth rates and explains what our current rate of growth means for American families. The report The Growth Imperative: How Slow Growth Threatens Our Future and the American Dream, was authored by Douglas Holtz-Eakin, the former director of the Congressional Budget Office and president of American Action Forum.

As Holtz-Eakin says, slow growth of this kind is a major threat to our way of life and our strength as a nation. It crushes incomes. It makes it harder to pay off our large national debt.

"The American economy, which was one the most expansive, innovative, and inclusive in the world, is no longer keeping pace with the needs and dreams of the nation’s workers and families," Holtz-Eakin writes. "Our lagging economic growth is a threat to the American Dream and to sustainable government finances."

The Growth Imperative report explains how even a single percentage point of additional growth can lead to remarkable improvements to lives of ordinary Americans. Readthe full report for futher insight into the implications of our current slow growth path.