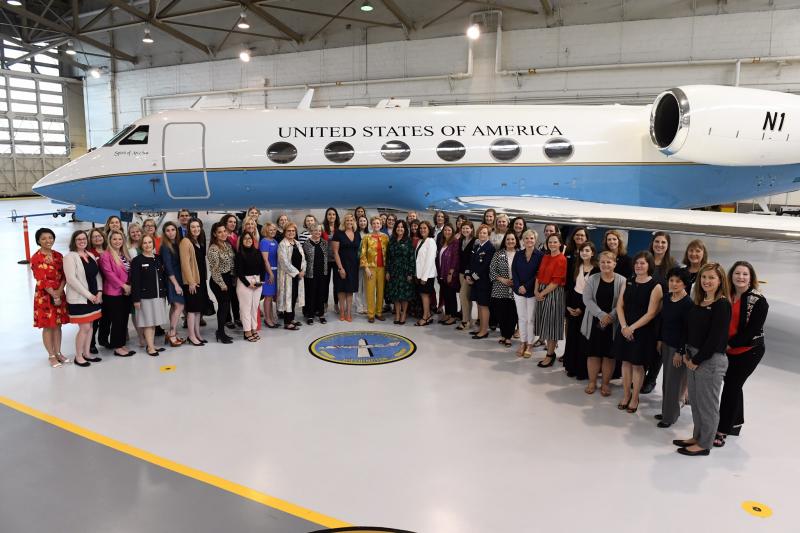 The military spouse unemployment rate is more than four times the national average. Second Lady of the United States Karen Pence knows that.

Now she wants military spouses to know what organizations, like Hiring Our Heroes, and businesses, like Microsoft, along with the state governors and federal agencies are doing to help solve this issue.

“We’re hearing you. We’re listening. We’re trying to do what we can to help you with the employment issue,” Pence told a group of Coast Guard spouses this week.

As of this month, Coast Guard spouses are not excluded.

“For the first time ever Coast Guard military spouses will now have access to LinkedIn’s Premium job search, networking, and learning benefits for free,” Pence said.

“With LinkedIn Premium, you can grow your network and schedule your informational interviews. You can send messages to hiring managers, recruiters or other military spouses at companies that you might be interested in,” Pence said.

Another benefit of LinkedIn Premium is LinkedIn Learning. With a library of more than 10,000 courses, LinkedIn Learning offers free online training on everything for Microsoft software to how to become a web developer.

Most of the classes are videos with supplemental reading material. The self-paced courses can be completed during your nights and weekends, anytime that’s convenient for you. They can be viewed on a computer, smartphone or tablet. Many include a certificate of completion that can be shared with potential employers.

“There’s a litany of courses that are specifically there to help military spouses succeed in their careers,” said Danny Chung, Chief of Staff for Microsoft Military Affairs.

After the LinkedIn Premium announcement, Pence highlighted several Hiring Our Heroes initiatives. She started with the Hiring 100,000 Military Spouses campaign. This ambitious three-year campaign calls for companies and businesses, of all sizes, across America to make a collective commitment to hire 100,000 military spouses by 2021.

“We’re working with America businesses and other organizations to find ways to hire military spouses and keep them employed as they move,” Pence said.

Since the campaign’s launch in June 2018, more than 100 companies have answered the call to hire military spouses.

“I hope to see many more businesses come alongside (this campaign) not just because it helps our military, but because it’s the right thing to do,” Pence said.

Pence also talked about attending the one-year celebration of the nation’s first Military Spouse Economic Empowerment Zone in San Antonio. This event was hosted by USAA in March.

“The great thing about it was that this was not a kickoff campaign. This was celebrating the military spouses who had found employment in their fields,” Pence said.

The MSEEZ program grew from the findings of a recent U.S. Chamber of Commerce Foundation study, Military Spouses in the Workplace. The study found that an overwhelming majority of employed military spouses said that having dual incomes was vitally important to their family, but only 50% of military families polled reported having dual-income status.

This disparity places an added strain on military families and can ultimately factor into a service member’s decision to stay in or leave the military — factors that can hurt overall military readiness and retention.

“Military spouse employment is a very important aspect of a strong and resilient military family. We know if spouses aren’t happy they’re going to say, ‘You served your time. You got to do this for four years or eight years or 12 years, now it’s my turn.’ We don’t want that to happen,” Pence said. “We want you to feel fulfilled the whole time that your service member is in the service.”

Hiring Our Heroes launched the first MSEEZ more than a year ago and throughout 2018 and 2019 has launched a dozen zones in cities across America. Last month, we launched zones in Virginia and North Carolina.

Building on a robust network of national and local employers, educational institutions, and community resources, these Military Spouse Economic Empowerment Zones foster collaboration between key stakeholders to help identify best practices that will support and advance the mission of connecting military spouses with meaningful employment opportunities, ultimately strengthening the financial security of our 21st-century military families.

This annual report will include recommendations to improve license portability and remove barriers to military spouse employment.

Pence encouraged military spouses to visit the Department of Labor’s license finder tool. This webpage, which is updated weekly, features an interactive map. Federal officials are working to make this map a comprehensive resource for military spouses.

“If you know you’re going to move to a certain state, go to the Department of Labor’s website and click on the state and see what the licensing requirements are for your particular career,” Pence said.

With the support of state legislation to offer temporary licenses to military spouses, the federal government is making strides to reduce hardships for relocating military spouses.

“Spouses have shared a lot of stories with me about the difficulties of being hired and the inconsistent professional licensing requirements you face as you move on the average every two to three years.” Pence said. “Some states have started taking steps, but more work needs to be done.”